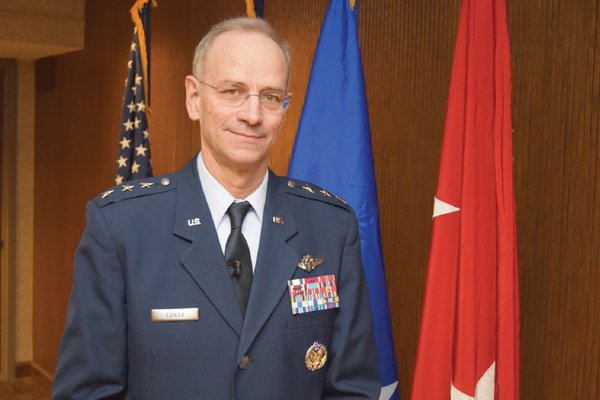 “It’s interesting. A little thing like hearing about a Medical Explorers post and deciding to check it out can actually lead to a series of events that take you somewhere you never thought you would go.”

That is a bit of an understatement, considering the source: Lt. General Mark Ediger, Surgeon General of the United States Air Force.

“If somebody had told me when I was an explorer that I would end up being an Air Force physician for 32 years, I don’t think I could have fathomed it,” he says.

Ediger says his career path proves one thing: You never know what opportunities may come up if you continually explore and broaden your horizons.

When he was 15, Ediger was living in Springfield and active in the Boy Scouts. His best friend was a teen named Jim Giddings, son of Frank Giddings, a radiologist at CoxHealth.

“When Jim and I were in high school, we would work during the summer on Dr. Giddings’ farm. It was pretty hard work,” Ediger recalls. Getting to know the Giddings family sparked Ediger’s interest in medicine.

“Maybe it was also because I realized what hard work it was working on a farm,” Ediger says with a laugh. “Dr. Giddings’ job sounded a lot more appealing to me than what I was doing on the farm.”

Ediger joined the Medical Explorers post and he was immediately hooked.

“I was impressed with how they worked together as a team. Everybody had a role and it took a coordinated effort,” he says. “Medicine is a team activity and that’s especially true today as medicine has become more complex and you have a multidisciplinary team to help the patient.”

“The diversity of it was really extraordinary. If I had gotten a job at the hospital, I would have learned a lot about wherever I happened to work, but being an explorer was a more diverse experience.”

He soon knew he wanted to be a physician and he was considering going to MU for pre-med. Then, a new possibility opened up: The University of Missouri-Kansas City launched a six-year program that combined undergraduate and medical school, just as Ediger began his senior year.

“I was extraordinarily fortunate that I got that opportunity,” Ediger says. “Had I not been a Medical Explorer at Cox, I would not have been ready to apply to that program. But by virtue of all the exposure I had at Cox, I was really firm on my intent to become a physician. It was because of my time at Cox that I was comfortable making that decision.”

His plan was to practice family medicine in rural Missouri, which he did for five years after medical school and a residency at Wake Forest University.

One of the things he loved about Medical Explorers was the diversity of experiences it provided.

He soon discovered he wanted that same diversity in his career.

He had never planned to join the military, but he wanted to expand his horizons. He was interested in what the Air Force had to offer. He entered active duty and launched a 32-year career.

“It turned out to be the right decision for me,” he says. “In the Air Force, I’ve had a lot of different opportunities to take on different roles. I ended up doing jobs that never occurred to me when I first came in.”

Over the last three decades, Ediger served as a hospital commander, a deployed flight surgeon and the lead surgeon for all U.S. Air Forces in Europe.

“These were all the kind of opportunities it never occurred to me that I might get,” he says. “I gained a broader perspective and acquired new experiences and new skills, particularly in the leadership area.”

Ediger says Medical Explorers reinforced his curiosity and hunger for new experiences – traits that guided him throughout his career. He’s impressed to see that after half a century Medical Explorers is still inspiring young minds.

“The exposure of Medical Explorers helps people understand the profession,” he says. “Any time you can broaden your perspective in a field like medicine, that is helpful.

“I appreciate the fact that CoxHealth has continued to provide this opportunity for young people. It’s a great service to the community.”

The importance of Medical Explorers: Direct access to professionals in the health care setting is extraordinarily helpful to a young person. It helps them gain an understanding of what it’s like to be part of the profession.

On strategies for success: Identify people who can be mentors and stay in touch with them as you move. Connecting with people whose advice you value is valuable. They can help you determine what opportunities may exist that you aren’t thinking about. They can advise you on how you can prepare yourself for other opportunities, or how you can develop yourself where you are.

His best advice: Be open to opportunities that may not match up exactly with what your plans may be. It’s important to be open to alternatives, because those can really be life changing. Consider any opportunity to broaden your perspective and grow, both personally and professionally.