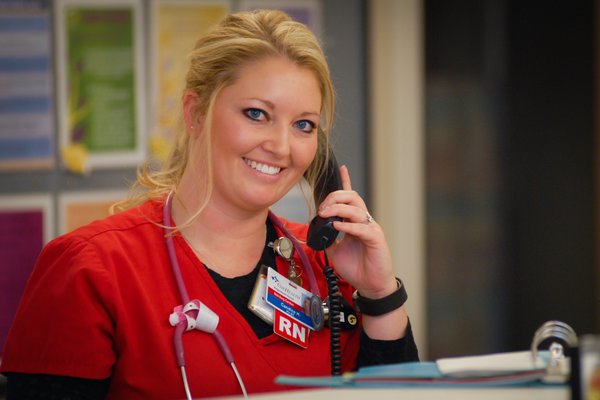 Doug Beckman, in nursing administration, was nominated by two different people for the DAISY Award.

Beckman was first nominated for the award by the daughter of a patient. In her nomination, she explained that Beckman always took the time to answer questions, explain tests, talk about medication and provide comfort to her mother.

“I think what impressed me the most was that he took my father home after work,” the patient’s daughter wrote in her nomination. “He said, ‘No problem, on my way.’ I found out Branson West was not on his way the next day from a staff member.”

She reported that Beckman also took the time to locate a phone charger for her when her phone’s battery died. She said it was a comfort knowing that Beckman was taking care of her mother each day.

Beckman’s second nomination came from the husband of a patient who reported that Beckman stayed after his shift to review the diagnosis and medications with the patient’s daughter who couldn’t arrive until late one evening. The patient’s husband also said Beckman went above and beyond several times for both him and his wife.

“He always had a smile for my wife and a good word,” the nomination letter reads. “He made her feel special and like she was his only patient.”

Holly Letterman, a nurse at CoxHealth Cancer Center Branson, was nominated by a mother whose son suffered injuries to his face in a baseball accident. The patient was referred to ambulatory infusion due to fear of dehydration as a result of his injuries, as well as for steroids and antibiotics.

“At infusion, we met a cheerful, helpful, caring and truly genuine Holly,” reported Kami Burtless, the mother of the patient and an employee of CoxHealth Women’s Center Branson. “She did all she could to ensure my son was comfortable while he was there for five days.”

Burtless explained that Letterman was very resourceful in helping find ways to ease her son’s discomfort and maintain hygiene.

“I really could go on and on about how wonderful she was to my son and our family during our time with her,” Burtless said. “It was a very scary situation for this mom and I will be forever thankful for Holly’s care, concern, helpful ideas, and so much more.”

Brandi Newberry  was nominated by the wife of a patient for her attentiveness and compassion. The wife explained that her husband was doing well following a pancreatitis attack and was expected to be released from the hospital when Newberry noticed a change in her husband’ condition.

“He did not even realize his breathing had changed,” the nomination letter stated. “Brandi listened to his heart and immediately hooked him up to the EKG machine to run a test.”

The patient was experiencing atrial fibrillation.

“Brandi was very compassionate and caring and certainly a very good RN,” the letter reads. “We were both very thankful that she had been our nurse on that unit. She was very informative, very respectful. We feel she is a part of our family. We were very impressed with Cox Medical Center Branson and have been telling everyone what an exceptional hospital you have here.”

“We had a ventilated patient in our critical care unit who was discouraged and just wanted to be outside,” Denevan explained. “Amanda and Renee mobilized his outdoor adventure. They wheeled him in his bed with the ventilator outside so he could get some fresh air and sunshine. The patient was so appreciative and cried tears of joy. I am so proud to be part of a team who puts patients first.”

About the DAISY Award

The DAISY Award is an international program that rewards and celebrates the extraordinary clinical skill and compassionate care given by nurses every day.

The not-for-profit DAISY foundation is based in California and was established by family members of a 33-year-old man who died in 1999 from complications from an autoimmune disease. The care he and his family received from nurses while he was ill inspired the DAISY Award, thanking nurses for making a profound difference in the lives of their patients and patient families.

Nominate your nurse for going above and beyond. Nomination forms can be found here.