Working in the COVID unit: A nurse's perspective 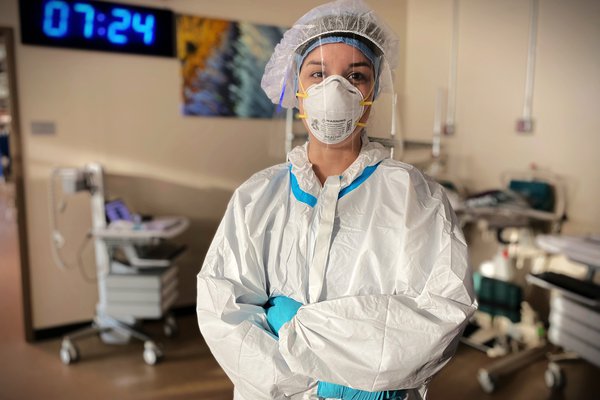 Gloves (two pairs), suits, shields and more protect nurse Casey Sample from COVID-19. But they do not guard her completely.

They do not shield her heart – nor those of many others – from the hurt and ache that comes from walking within CoxHealth’s West Tower COVID ICU.

Shoe covers muffle the sound of her steps as she crosses the threshold, a contrast as the doors swing open and reveal an open space full of controlled chaos: Humming and beeping equipment, staff soaked in sweat, and patients who are extremely ill due to the viciousness of the virus behind COVID-19.

While it’s a place Casey never wanted or expected to be, it’s also a space the nurse has no intention of leaving.

“We’re there because we want to help people. I don’t know if that’s silly to say, but that’s what it comes down to. I’m there because I want to save lives. I don’t want people to hurt.”

Thankfully, the majority of hospitalized COVID patients at CoxHealth do go home: Thousands have over the course of the pandemic, each time prompting “Here Comes the Sun” to play over the hospitals’ intercom system.

But for those in ICU, where Casey works, the course of the disease is much more grim. While health systems and providers do all they can, treatment for COVID is largely supportive at this time.

Around 40 percent of COVID ICU patients do not survive.

“Nobody dies alone in there for me,” she says. “I’ll sit with them; I’ll pray with them. Whatever they need and then I’ll push the ‘good’ (pain) meds. I always tell them I have the ‘good’ meds. That’s kind of a little snicker for them at the end. I try to cut the sadness as much as I can, but…

“Those are the moments I’ll look back on and remember. Holding a patient’s hand for two hours while she passed. Or another patient on Father’s Day, crying with him and telling him it’s OK to go to heaven.

“Those are the moments I’m really upset and I’m mad and this doesn’t have to be happening right now.”

Casey can count the number of patients she’s cared for who survived since the start of the pandemic.

Like many others in the tower, Casey has had people fight the belief that COVID is real. She’s had patients lash out, perhaps in fear and denial, about the presence of the virus.

She’s been hit – both with words and fists – more than once by patients. But figurative blows come in her personal life, too, from friends and extended family who persist in the belief the that pandemic isn’t serious.

“This is me. This is my story,” she says. "You’ve known me since I was born. Why are you thinking I’m lying? That I’m part of the big health care conspiracy? They think it’s for-profit or whatever. I’m not a person to distrust in this situation. I’m from here. I want to protect the ones I grew up with. Just yesterday a girl who was a year younger than me died. She was 35.”

“I was the one who handed him his phone and said, ‘You need to call your mom. We need to intubate now,” she recalls. “He was telling his people, ‘It’s fine, it’s fine. I’ll be OK, I love you,’ and they were the sad ones. He died four hours later.”

At last note, around 95 percent of patients hospitalized with COVID pneumonia at CoxHealth are unvaccinated.

Casey was a relatively new nurse when she began caring for COVID patients at the start of the pandemic. Her new occupation brought a moment of joy for the single mom, who overcame difficult divorce with a light-like goal at the end of the tunnel: Becoming a nurse, just like her grandmother.

“I left with nothing. Absolutely nothing,” she says of starting over. “I had my clothing and books. Took the kids, started nursing school in 2016, and went to the hospital as a sitter just so I could get my foot in the door.”

She became a nursing assistant in Cox South’s Medical ICU to help her get through school. There she learned that critical care was an area where she wanted to be: Both for the necessary skills, and the chance to develop deep relationships with patients and their families.

Unfortunately, the latter has been more difficult than she ever imagined in nursing school. She had only been a nurse for a matter of months when the pandemic hit, bringing waves of devastation far worse that any typical critical care unit.

“I worked in the ICU, so I knew what I was setting myself up for. This isn’t that,” she says. “I’ve had people tell me, ‘Well, just quit if it’s too hard,’ or ‘You knew, you worked in an ICU. You knew it was going to be sad.’ This isn’t what we’re doing right now.”

She speaks of the point when they lost six patients in one day. “I came in that morning and we heard that there was a code on med-surg. That person died. We lost three more before I took my breakfast break.”

When a patient will not survive, and is transitioned to comfort care, staff make every effort to coordinate details so loved ones may be present. There is a small room through a door to the tower where most go: A private space that is isolated from the hum and buzz and beeping machines of the rest of the tower, where patients and family members may be together.

“This is a new addition to really help the mental process for the family,” says Casey. “We coach them through getting dressed in PPE which is really overwhelming. They wait out here, we come in this door, we put them here, and then we withdraw care."

She and staff know it’s not ideal, but “in our disaster situation, this is the best we could come up with.”

She speaks of the trauma – for both families and personally – from the whole experience, one in which no one is to blame but a virus. And she shares one of her most traumatic moments, when a woman was on comfort care and was visited by several young children.

“We rolled her in, we withdrew care, and then it was me standing in the corner, watching the monitor so they don’t see, trying to keep it silent,” she says. “I’m just crying, crying, crying, and then she went, and then the daughters dropped the rails and they laid down with her.

“I hate it in here,” she says of the emotional distress found in the room’s walls.

Some 18 months since the start of the pandemic, health care workers cope differently with how the time has affected them. Gatherings aren’t possible – in an effort to keep staff safe – for them to process together.

In addition to the untold tragedy and trauma, many of them have their own struggles away from work as well. Casey has her own, too. One of which was having COVID herself late last year. A friend came down with the virus, and shortly thereafter, she began experiencing symptoms as well.

For her, neurological effects of the virus became so severe that she had to step away from patient care for several weeks before being cleared to return to work. Even today, mild symptoms still persist.

“I got vaccinated as soon as it was available,” she says. But, before she was, she had questions.

“I was hesitant even. I had questions, and we were all nervous. And I said, ‘Well, I’ve already had COVID. Do I need this? We talked: Yeah, It’s evolving. Yeah, it’s not going to be the same strain and if I got sick again it could be a lot, lot worse.

“It’s very unknown. I don’t want to get COVID again.”

On a recent evening, Casey leaves the hospital and walks out under the sun-setting sky to her vehicle in the parking garage.

Thankfully, one of the least traumatic days she’s experienced for COVID care. Perhaps it was fate: As she started her shift, Casey proclaimed that it was going to be a good day. The patient she was assigned was doing far better than most, allowing her to assist other staff members who needed extra hands.

Yet, while it was “good” in the minutiae of now, it’s also another day in this pandemic, with no end in sight. That doesn’t stop her or staff from hoping for a better tomorrow. And she rejoices in the number of people who have taken her experience to heart, which she regularly shares through social media, and decided to be vaccinated.

“As far as the whole picture, I feel proud. In the moment, now, I feel discouraged,” she says, but notes:

"I think I’ll feel pride again knowing that I’ve done everything I can.” 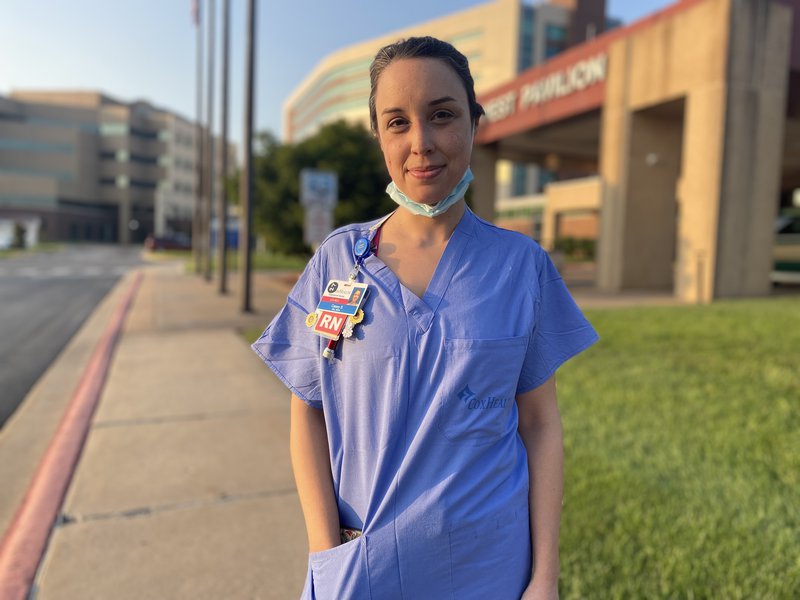