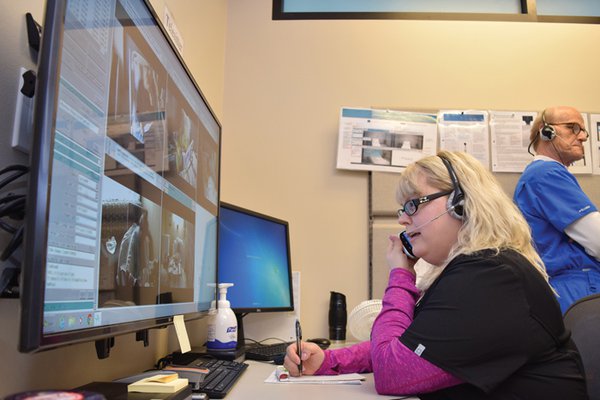 Patient Safety Assistant Joanne Harris (above) talks with patient care staff from the command center at Cox South where PSAs are now using technology to serve as virtual sitters.

Patient Safety Assistant Wes Fizer says working in health care for the past 15 years has honed his instincts. He's seen enough while monitoring patients to know when someone is in trouble.

A few weeks ago, he made a crucial call without even being in the room. His ability to assist patients was enhanced by a new telesitting technology, which uses cameras in patient rooms.

Now, CoxHealth PSAs who have supported care in person in patient rooms can assist up to 10 patients at a time. Telesitting allows them to have a virtual presence, interacting with patients and staff through a microphone and speaker in the in-room cameras.

Fizer was on duty in the program's command center at Cox South, where PSAs monitor their patients on high-resolution monitors, when he observed a student nurse enter a room to deliver medication.

The patient had experienced difficulty swallowing in the past and his bed had been raised to assist. The patient took the medication.

"I could see that the patient looked like he was having a hard time breathing," Fizer says. "I knew right away that if I hit the stat alarm, everyone is going to come running."

That's what Fizer did, with no hesitation. Within seconds staff members flooded the room to help clear the patient's blocked airway.

"The nurse called me from the floor and told me I did a good job," Fizer says. "I just feel like I'm doing what I am supposed to do."

Fizer's experience is a good example of how telesitting technology is expanding the tools PSAs have to take care of patients.

Since its launch in January, telesitting has helped CoxHealth provide patient safety support to a larger number of patients with the same amount of resources.

Rachel Wells, administrative director of Nursing, says in the past CoxHealth typically had 35-40 rooms a day that qualified for a PSA. Nursing Operations had 15-20 PSAs available. PSAs would focus on the highest risk, while other patients would be covered by nurses' aides and unit secretaries.

"One of our main goals in adding telesitting as a resource is to give nurses' aides and secretaries back to the floors so they can do their primary jobs," Wells says. "This lets us focus on making the most efficient use of PSAs, since this is a resource that is always in high demand."

Since January, the telesitting program has deployed 28 cameras in units throughout the system. PSAs work in two monitored stations that operate 24/7, and they have the capacity to add a third as the need requires. Currently, the team of telesitting PSAs averages 10-13 monitored patients each day between Cox South, Cox Branson and Cox Monett.

In the control room, two PSAs watch monitors with live video feeds from patient rooms. The screens include information on each patient, including what concerns they are being monitored for.

Frequently, PSAs are watching for patients getting out of bed, removing masks or pulling on IVs or catheters. Telesitters can speak with patients through a microphone, or they can use automated prompts, reminding patients to stay in bed until assistance can arrive, for example.

When a PSA has clicked on a particular room, they are able to hear audio from the room as well as adjust and zoom the camera.

Leaders say it's a common misperception that sitters are listening to rooms all the time, but that's not the case.

"PSAs can only hear conversations when they have clicked on a room," says Brice Cook, nurse manager. "Otherwise it would be impossible – imagine trying to listen to every conversation you hear in the cafeteria all at once."

Cook says staff frequently think they can get a PSA's attention by waving at the camera, but that's not always the case. Cameras can zoom so tightly that PSAs can read text on an IV bag, so it's easy for staff in the room to be out of frame and not realize it.

If staff in the room need to communicate with the PSAs, the best way is to contact the PSA via the Cerner phone system. The telesitters are in the Cerner database and there is also a phone number posted on the camera.

Wells and Cook say the system has been well received as staff members get used to the technology and all it has to offer.

The vendor, AvaSys, operates in the U.S. and Canada, including at major health systems like Mayo Clinic and Johns Hopkins.

"Other hospitals have seen a 50-70 percent reduction in falls," Cook says. "It's been so successful elsewhere and it will be here, too."

Wells says Fizer's experience is not unusual. The technology has greatly expanded the support PSAs are able to provide for patients and staff.

"We have seen telesitters page rapid response or call a code blue when the staff had their hands full," Wells says. "In one case, a nurse was assessing a patient and asked the nurses' aide to call a rapid. That aide had never done it before. The telesitter stepped in and said, 'I can call it for you.'

"The PSAs who have learned to do this have been phenomenal," Wells says. "I have been impressed with their skill expansion."

Fizer agrees: "It's a good thing. We can observe more patients than we could with in-person sitters. It helps the floors so they don't have to pull their staff. I love it. It's a lot of responsibility, but everyone who does it, we're good at it."

Q: Who is watching the video feeds?

A: The cameras are monitored in-house by CoxHealth's team of patient safety assistants.

Q: How do patient care staff communicate with the PSAs?

A: The best way for a staff member to reach a PSA is by contacting them on the Cerner phone, at the number posted on the camera. Waving at the camera may not work, because PSAs may have it zoomed in tightly to better monitor their patient.

Q: Do PSAs have audio from every room?

A: While each camera does have a microphone, PSAs aren't listening to every conversation. They can only listen in to one room at a time, by selecting a patient on the screen.

A: Video feeds are live and are not recorded. Staff can request that the camera be put into privacy mode when needed.