View from the front lines: Inside our COVID-19 units 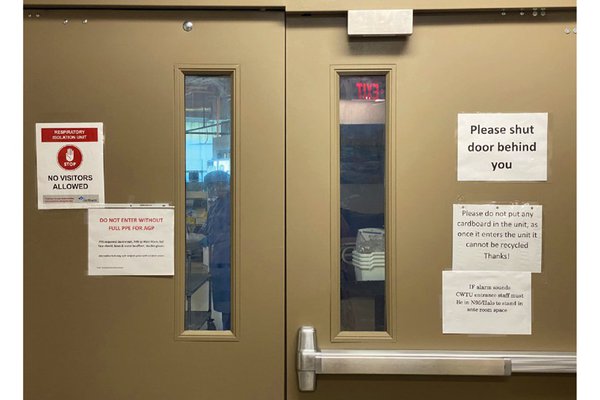 It’s difficult to see things, both figuratively and literally, that happen where most do not go.

In normal times, many elements of health care are visible. Illnesses, injuries and recovery often happen in places and spaces where families and friends, and collective communities, can bear witness to what is going on. And, in many cases, be part of a process of healing, compassion and understanding.

These, however, are not normal times. They're unlike something many have ever seen.

Cox South’s COVID units are filled with patients so sick and contagious that they must be cared for in places where no family and even few health care workers ever enter. It is in these units where some of the greatest challenges occur: For patients, in fighting for their lives, and staff, in mentally, emotionally and physically being able to serve dozens of patients who are gravely, and often, terminally ill.

Due to restrictions, it’s difficult to show any images that respect and protect the privacy of our patients. But staff members share what they see and experience:

“As I walked through the unit, I never expected we would get to this point,” says one of our physicians.

This physician is just one of many staff members who are serving patients in our COVID units. In this account, the people who share sentiments are not named: Instead, they share a collective experience that one said is the hardest in their professional careers.

‘We see them when they’re extremely sick’

While there are various units for COVID patients at Cox South, one of the primary areas is the West Tower COVID ICU, which until a few months ago was simply shell space in the “new” tower. It sat empty for five years until it was needed. That time was March, when it was transformed – in just two weeks – into a COVID-19 unit.

We hoped we’d never use it. And we didn’t, for several months.

But as our cases have increased from a trickle to a steady stream to a flood in recent weeks, that unit became more crucial than we ever imagined.

“I think because we had a delayed surge compared to other parts of the nation, we probably put our guard down,” says another of our physicians. “We didn’t think it would hit us as it has. Simply, even last week, our average case daily growth rate we were ranked sixth in the nation. So there’s no doubt we’re part of this Midwest surge that’s happening now.

“I think it goes back to that community just got a little overconfident that it wasn’t going to hit us or touch us. It was just a late response getting here, and now we’re dealing with those consequences.”

The number of cases far exceeds the 51 beds built inside the open-ward COVID unit. As of October, we've seen a high of 93 COVID-19 patients in our hospital facilities. They represent all ages: From pediatric patients to people in their 30s and all the way up to upper 90s.

The COVID ICU, the Critical Care physicians, we’re seeing them at their worst and right before, or during, death. During the dying process. The majority of people don’t understand or can’t picture what we are seeing. So I think that’s been frustrating for all of us. Any health care worker who works with these COVID ICU patients, we see them at their worst.”

Staff are an ‘emotional medium’ for families

As cases have continued coming in, our staff members have stepped up to care for each one – regardless of if patients previously believed COVID-19 was a real threat or not.

“We get multiple phone calls a day from multiple family members of these patients who they don’t see what their loved one looks like,” says a nurse. “They don’t see how sick they are. They want us to retest them for COVID. They’ve said they think there’s a false positive. We know what COVID looks like now after six months of dealing with it. It’s kind of like beating your head against a brick wall when you’re constantly having patients and family members and the community argue so intensely that it’s not real, or that we’re treating it in the wrong way.”

“What’s been most frustrating is that we don’t have effective treatment as of yet,” adds the physician. “Therapies that seem to be helpful, people latch on to some others that are not yet proven or have been disproven to be effective more so out of hope and desperation. It’s those days that we have multiple deaths. Or we have families, because all you can do is talk to them. They can’t be there, next to their loved one, during the dying process. Being like an emotional medium, I guess, where we’re trying to convey families’ love and care to that patient and back the other way.”

After hours of service, these professionals go home, but they don’t leave their work behind. As our team becomes a second family to these patients, they wonder how they’re doing when not at the hospital. Some call to check on their patients. Some of their patients, in fact, are friends and acquaintances who they knew before COVID tragically brought them together.

Thankfully, there are many people who survive this illness and go home. Each one is a victory, and a reason to celebrate. But in recognition of the ones who do not make it – or have severe complications because of the virus’ presence in their body – our staff have a message to share.

“We do have a lot of support in the community. It’s just tough to go to Walmart after our shift and see somebody without a mask on who’s coughing. Or to see those people who aren’t trying to protect themselves or other people. That’s what’s frustrating,” says a nurse. “We just want to be able to get this message across clearly that we are all in this together. We all have to be supporting each other. We all have to be wearing a mask for one another. It’s not for yourself, it’s for the ones around you.”