Veterans Honor Program recognizes those who have served 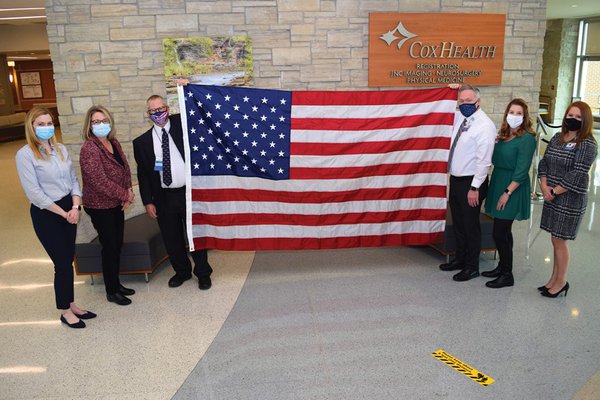 Honoring military veterans for their service is a part of our culture, and CoxHealth is expanding the recognition we provide with a new Veterans Honor Program.

The program launched systemwide this week, standardizing the ways we recognize patients who have served in the United States Armed Forces.

“This opportunity to create a unique program for our veterans in the populations we serve is a huge win for our communities and for CoxHealth,” says Kerry Miller, volunteer services coordinator and member of the Veterans Honor Program Committee. “Through a team effort, this program is now a reality.”

CoxHealth has had veterans’ recognition in place at campuses like Cox Branson and Cox Barton County and through our Palliative Care Departments. The Veterans Honor Program builds on those efforts and provides standardized recognition across the system.

Patients who are veterans or active duty military members will be identified during the registration process at CoxHealth hospitals. They will have the option to opt in, or out of, the program. Si3 has added questions about veteran status to charts, to make sure caregivers know when a veteran is in their care.

During their stay, veterans will receive:

The CoxHealth Foundation is working to secure sponsors to assist with the costs of expanding the program systemwide.

The Veterans Honor Program Committee is currently working on the next phase of the program: a Final Salute for veterans who pass away at our hospitals.

In the Final Salute, staff members will line the hall as the patient is moved from the unit, similar to the Path of Honor ceremony we provide for organ donors. Veterans will be draped with a ceremonial American flag for the salute.

On Monday, representatives from Congressman Billy Long’s office delivered four 5’x8’ American flags for the Final Salute. In total, CoxHealth has five ceremonial flags at south, three at Branson and one each in Monett and Barton County for the salutes.

The committee plans to begin Final Salutes in the coming months.

The committee includes members from Si3, the Office of Patient Experience, CoxHealth Foundation, Nursing Administration, Centralized Transport, Food Services and more. Staff and leaders from all campuses, including Branson, Monett and Barton County, came together to make the program possible.

For the entire group, the program’s launch is a point of pride.

“Prior to COVID-19, (President and CEO) Steve Edwards reached out to us to create a systemwide program that would honor each veteran, with the Final Salute being the ultimate honor,” Miller says. “As a military veteran myself, I am grateful CoxHealth is leading the way to honor those who have served. It is truly an honor to be part of the Veteran Honor Program here at CoxHealth.”

A flag magnet on display outside a patient room at Cox Medical Center Branson.