A Veteran's Fight: 'Men get breast cancer, too' 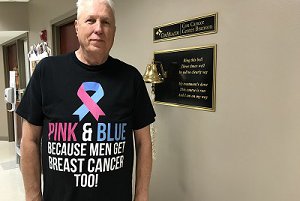 As a 26-year veteran of the U.S. Army, William “Dub” White has been in the thick of combat, but his latest battle was a rare diagnosis that had him in the fight for his life.

The Vietnam and Desert Storm vet was working in his yard the summer of 2017 when a stabbing pain struck his chest. “I went inside to cool off but it happened again when I went back outside,” says White, president of Veterans Military Coalition of the Ozarks. “I went in to take a shower – that’s when I felt a lump on my breast.”

He called his family doctor right away. The following week was quite the whirlwind. That Monday, he was in the office where his provider examined the lump. That Tuesday, he had X-rays and underwent five biopsies the following day. Then came the official results: White had breast cancer.

It was a shock, as only 1% of all breast cancer diagnoses occur in men.

Over the next few days, White remembers chatter about percentages. “Doctors, surgeons and nurses were all throwing out numbers,” he remembers. “Basically, they all agreed that there was a 90% chance that the cancer would eventually occur in my other breast, too. I looked at my wife, then looked at my surgeon, Dr. Moll, and said, ‘Just take them both.’ I didn’t want to worry about having to go through this again.”

After healing from the double mastectomy, White began chemotherapy, which he calls the hardest part of treatment. His regimen included 16 sessions with 21 days in between each one.

“That first time was rough,” he can now say with a smile. “If there was a pain known to man, I had it! It made me so sleepy that I felt dead to the world by lunchtime.”

Even though White says he felt so weak that he’d fall asleep standing up, he found great comfort and strength in the staff at Cox Branson’s Cancer Center.

“Those nurses are angels on this Earth,” he says. “Every five minutes, they’d come and check on me during treatment. The entire building became my family over those long months. I still get attacked for a hug when I walk down the hall!”

White completed chemo in late August of this year and proudly rang the CoxHealth bell to celebrate his final treatment. He’s happy to be back to the grind of his daily volunteer work, helping veterans treated at Cox Branson navigate the health system, duties he values even more now that he’s been a patient himself.

“Throughout this whole thing, I just clung to my belief in God, my belief in my doctors and belief in this incredible hospital,” he says with that trademark grin. “Life goes on. I’m not going to dwell on my past even though cancer is a part of my story and my family’s story now. We beat this monster! It’s time to march forward and, by golly, that’s just what I’m going to do!”