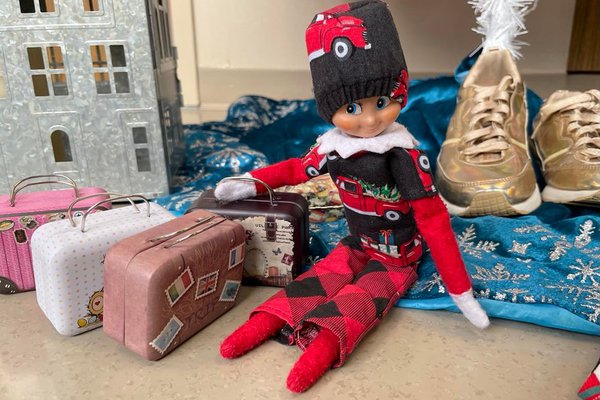 Cox Branson surgery assistant Danna Edgeworth catches a peek at something special sitting under the waiting room tree. “Well, look who we have here,” she says as she shuffles over and stoops down to greet the foot-tall visitor. “We’ve missed you, sir.”

Propped up under the sparkling tree is Elfie – Santa’s scout elf who arrived for his fourth year at Cox Branson to spread cheer and stir up good trouble. “Look at your new clothes,” Edgeworth says as she gently straightens his hat. “I’d recognize this fabric anywhere.”

A lot of hospital staff will recall that festive, cotton print adorned with red trucks and holiday mittens. This year, Elfie’s clothes and sleeping bag are sewn from the Christmas surgical caps of his very first friend – the late Kim Johnson on our surgery team. 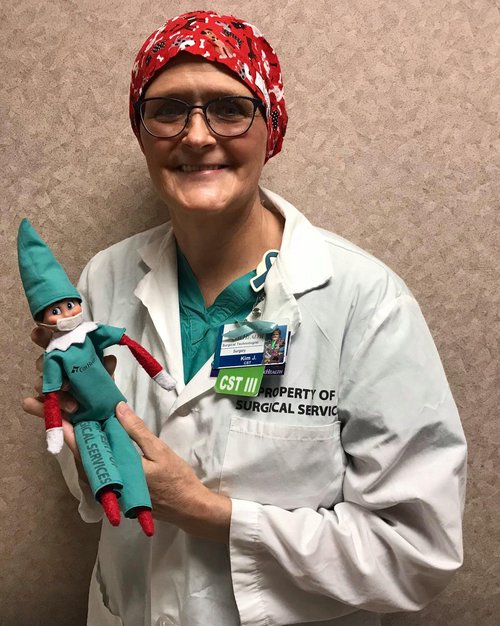 “About four years ago, we wanted to do something fun to boost holiday spirits around the hospital,” explains Brandei Clifton, communications manager at Cox Branson. “Kim thought an Elf-on-a-Shelf would do the trick, but even she didn’t know how big her little idea would grow.”

Johnson was nervous colleagues wouldn’t play along because they were too busy or would think the idea of “playing” at work was too silly. The litmus test for how he’d go over was his first stop that first year to the surgery team.

“I remember handing him over to three of our big, burly male co-workers in green scrubs,” Clifton recalls with a laugh. “We told them to have fun with a doll and send us pics. By the time I got back to my office, they had texted photos of them operating on Elfie because he ate too many candy canes. We knew this was going to be fun!”

Johnson served as the official “Elf Agent” until her cancer returned last year and she became too weak to participate. Still, she kept up with his adventures and her eyes would light up when he’d visit her hospital room as her health declined.

“It was so heartwarming to see her enjoy the magic of Christmas through that elf,” says Holly Senter, Johnson’s friend and co-worker. “They made a dynamic duo and brought so many smiles to our entire team.”

Senter’s team put up a full-size Christmas tree in Johnson’s hospital room during her final days last year. That special tree now glows in the surgery waiting room, adorned with special ornaments to honor her fight against ovarian cancer. It’s the same tree where Elfie appeared this week, next to Johnson’s iconic gold sneakers.

“What a special first stop this year,” Edgeworth says as she scoots his elf-size suitcases out of the way. “Kimmy would love this and would laugh at all the mischief he’s about to make.”

Clifton says Elfie’s adventures get a bit more “extreme” as the years go by.

“When he first arrived in 2018, he’d knock over candy dishes or throw cotton balls, but now he ‘steals’ helicopters,” she says. “A lot of staff started planning their time with him the day he left them last year. It’s so fun to see what they come up with.”

Clifton says Elfie, who is carried between departments in a giant gingerbread house, has gained a following outside of the hospital as well.

“It’s really sweet when a young patient will ask for him or stop us in the hall as they’re visiting and ask what he’s doing today,” she says. “But the best was when Dr. Cameron, our new surgeon last year, asked if she could take a selfie with Elfie to send back home to her family because they follow his adventures from out of state. Stories like that make me smile and I know they’d make Kim smile too.”

Hospital staff hopes the tradition of Elfie will boost spirits this year more than ever.

“These past almost two years have been a doozy on all of us,” Edgeworth says. “If there’s ever a time we crave a break for laughter, it’s now. Everyone needs a lot of joy and a dab of good trouble!”

As Elfie prepares to leave surgery for his visit to the next department, Edgeworth catches a glimpse of a message printed on his sleeping bag and reads it aloud: “Elfie’s special clothes and bedding are made from the scrubs of his very first friend—the late Kim Jonson who embodied the true spirit of Christmas.”

“Isn’t that special,” says Edgeworth. “And so incredibly true.”

You can follow Elfie’s adventures on Cox Medical Center Branson’s Facebook page now through Dec. 24 when he returns to the North Pole.