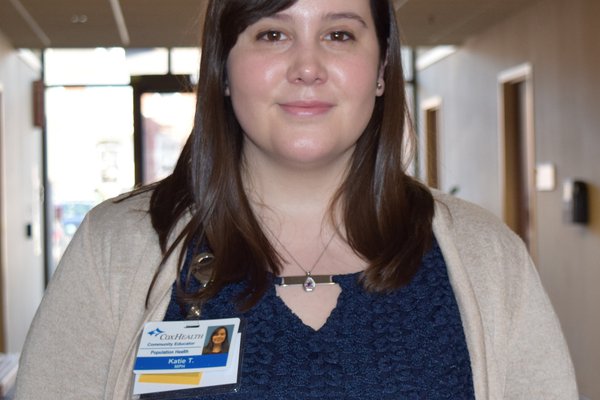 The opioid epidemic has been described as one of Missouri’s most pressing health issues. According to Missouri Foundation for Health, roughly 64,000 Americans died from drug overdoses in 2016, with 49,900 of those deaths related to fentanyl, heroin and prescription opioids. In Missouri, overdose deaths were up 28 percent from 2015.

Katie Turck hopes that by empowering area students, they won’t become part of a growing statistic.

Turck recently joined CoxHealth as a community educator for the Stone and Taney Counties Substance Abuse Initiative.  Her focus will be on supporting evidence-based prevention programs in local schools and the community.

The U.S. Department of Health and Human Services reports that in 2016, 11.5 million people misused prescription opioids and 116 people died every day from opioid-related drug overdoses.

“It affects so many people and if we start working with students early, telling them about the dangers and giving them the resources and the tools they need to make safe choices, we can change the future,” says Turck.

Turck was born and raised in Pevely, Mo., just south of St. Louis. She has a bachelor’s in psychology with a minor in gerontology and a Master in Public Health.

“There’s a real stigma around substance misuse and I want to help break down that stigma and get people talking openly about it so people who need help get it and lives can be changed,” Turck says.

“We’ll support the evidenced-based programs that are working and see what resources we can offer to support those programs,” Turck says. “Depending on what we learn through our assessment, in some districts without resources, we may be able to help implement a program that is evidenced-based and proven to have a lasting impact.”

The Stone and Taney Counties Substance Abuse Initiative is a grant-funded project aimed at reducing and preventing substance use and misuse. It is a joint effort between CoxHealth and Skaggs Foundation.