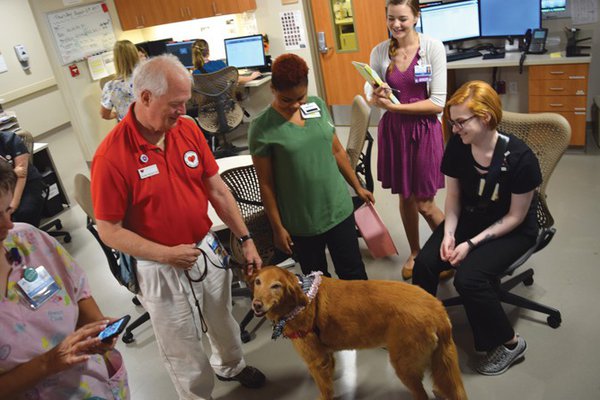 When Dr. Norman Knowlton retired from CoxHealth’s Diagnostic Clinic in 2013, he stopped practicing internal medicine on a daily basis.

In recognition of their efforts, Daily Point of Light has honored Dr. Knowlton and Lucy for their service to patients at CoxHealth. The international organization, which honors volunteers for the difference they make in their communities, decided the duo was worthy of the award. However, Dr. Knowlton says his efforts aren’t done to receive recognition.

“I have always felt volunteering is my duty to serve my community, hospital and especially patients – and because it is the right thing to do,” he says.

Dr. Knowlton’s journey in pet therapy began eight years ago, before he retired from medical practice. That was when he and his wife rescued Lucy, who was being given away through an ad on Craigslist. The couple, involved with Pet Therapy of the Ozarks, started training Lucy to be a pet therapist after she earned her Canine Good Citizen certificate.

After passing all of the necessary exams, Lucy began making the rounds with Dr. Knowlton after he retired four years ago. Today, the duo visits patients around eight days each month, and they have become some of the most popular visitors for patients. A few of the areas they visit include oncology, neurology, radiation and infusion centers and Meyer Orthopedic and Rehabilitation Hospital.

“I’ve even tied her to the front of patients’ walkers and had her walk with them,” he says. He mentions another patient who was recovering from a stroke. “I had her pet Lucy with the ‘bad’ side to build up strength.”

Some of their biggest fans are members of staff, who crowd around to pet Lucy the second she walks through the door. However, their real purpose and joy comes from seeing patients. The duo enters each room quietly, giving patients a chance to see Lucy before she approaches them.

The response, however, is often overwhelmingly positive.

There’s a man, weak and in bed, who isn’t too tired to smile when he sees Lucy walk in. He reaches out and pets her head softly. Another woman, missing her own dogs while in the hospital, is comforted by the sight of Lucy’s furry face. It’s clear that simply her visit has left an impact on their days.

Looking back at his medical career, Dr. Knowlton says that pet therapy is much different than when he was practicing medicine. After all, in these cases, he doesn’t know patients personally. He doesn’t know their backgrounds, or often even their names. But he does know one thing: He knows that their interactions with Lucy make a difference.

“I won’t say it doesn’t bring you tears,” he says. “When you see a patient who is dying, and you see the joy they get out of seeing Lucy, you sit there and say, ‘Wow.’”