Springfield’s first hospital birth of 2022 is a girl 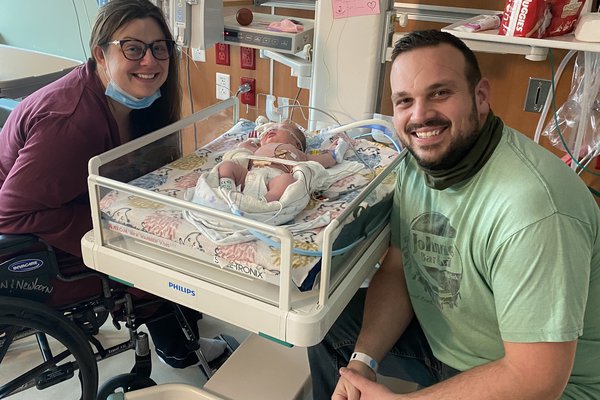 The first baby born at a Springfield hospital in 2022 arrived just minutes after the new year, around three weeks early, and right on time to celebrate her great-grandmother’s birthday.

Clara Jacqueline Everding, born to parents Nathan and Kelly of Nixa, arrived at 12:38 a.m. at Cox South. She weighed 8 pounds and 8 ounces, and was 20 inches long.

Her arrival wasn’t expected until later in January, but other than receiving a bit of oxygen due to her early birth, all is well with mother and baby – making the early arrival a pleasant surprise, given that Clara now shares a birthday with Kelly’s late grandmother.

“I kind of joked that it would awesome if she came on the first because that’s my grandmother’s birthday,” says Kelly. “So it was really special when my water broke on the thirty-first.”

Even without the shared birthday, the couple had chosen Jacqueline – in honor of Kelly’s aforementioned grandmother – as the baby’s middle name.

“So Clara got her name and her birthday,” says Kelly.

Clara joins sister Alivia, age 8, and Bennett, who is 5.

The Everdings were given a gift basket in celebration of the birth from the CoxHealth Auxiliary and Administration. It included a Noah’s Ark blanket, picture frame, first tooth and curl set, scrapbook to commemorate birthdays, large gray Teddy bear, and congratulatory cards.