Sisters serving together in the COVID ICU 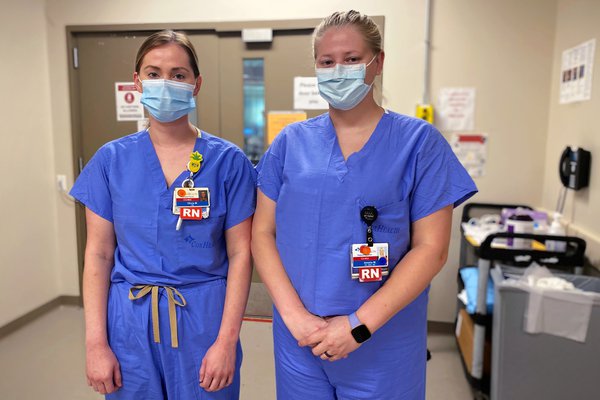 The fight against COVID-19 doesn’t end when Amelia Caudle and Olivia Montgomery leave Cox South in sweat-soaked scrubs at the end of a shift.

They may be off the clock, but the brains of the ICU nurses -- who are also sisters -- are still whirring from the hours spent watching death and devastation of the system’s sickest COVID patients. While many patients at CoxHealth go home, nearly 40 percent of COVID ICU patients do not survive. Nearly all are unvaccinated.

The nurses would not, should not, expect to have to continue a fight once they leave for the day. But they do. Because that fight, at times, is not one they can escape.

It is one inside their own minds.

“There’s too much happening to process day-by-day in my brain, so I just go home, sleep, and come back. And I think at this point I may be working to not have time to think," says Amelia. "I’m a SANE (Sexual Assault Nurse Examiner) on the side. You are trained on trauma-centered care, and not re-victimizing patients who go through traumatic experiences. Albeit it those are sexual assaults. But this feels like daily trauma that we’re experiencing that we’re not processing.”

Just this week, a COVID patient younger than the sisters -- just 23 years old -- died at CoxHealth. More than 130 have passed away since July 1 alone.

“We’ve had nurses who have been here less than two years questioning if they want to stay because of all the death that they’ve seen,” says Olivia, a nurse herself for only a little more than three years.

Natives of Springfield, the sisters grew up locally, and have spent most of their lives in the region. Amelia and Olivia have kept the legacy of their family going for a second generation: Their mom, also a nurse, has spent 30 years at CoxHealth. They have also seen the polarization of their hometown when it comes to COVID, and even facing some who say they are lying about its harsh reality.

Like last week, when Amelia walked out to her car after a shift, ready to head home to her husband -- a house supervisor at Cox South -- when notifications on social media caught her attention.

She’d made a post on Facebook, as she’s done several times, to warn of the COVID's devastation. It was done to warn and inform and remind that the virus is real. This time, someone found what she’d said to be offensive.

A screenshot was shared on Instagram, and the poster said that patients were refusing to go to the hospital because of nurses like her.

Amelia pulls out her phone, reading comments and messages from the post:

“’You know the future of your patients because you kill them.”

“It is the fault of the doctors and nurses like her for not actually providing proper treatment in the proper time frame! Early treatment of Ivermectin, Hydroxychloroquine and IV C and other nutrients and approaches would be saving lives every day.”

“You are disgusting and shouldn’t be anywhere near sick people. God have mercy on you.”

“The unmeasurable karma you will reap from this post is staggering. I will pray for you - best of luck.”

The onslaught was mind-boggling for the nurse, who has been serving COVID patients since the beginning of the pandemic.

“I literally went from coding a patient for 30-some minutes, and then assisting in intubating and then doing a tube exchange on that same patient,” says Amelia. “Then it was time for shift change. I was looking at my phone as I was leaving, and … all these people were messaging me because she'd shared my name.”

Olivia, too, has gotten negative responses to sharing warnings on social media. “I just had to let it go,” she says of a particular instance. “It wasn’t good for my well-being, I wasn’t going to argue with someone after they said I was a liar and a fraud. I wasn’t even going to try and justify anything with them.”

Olivia and Amelia do have a unique view on the pandemic that few, even in the world of health care, ever see. Their work is often done behind double doors in units where people only go because they have to: Patients because of the care they require, and caregivers because they are called to help.

And while perhaps showing its devastation through photos and video might be convincing (or not) to some, it is difficult to show its enormity while being sensitive to patient privacy. That leads health care workers like Olivia and Amelia to try and educate and process through social media.

“I do think this time around people are being more open about how they’re feeling,” says Olivia. “We’re leaning on each other, and people are starting to talk about how they don’t feel like they're OK. How tired they’re getting. I think we’re trying to rally each other up, and trying to be supportive as we can."

“And normalize the mental toll this is taking,” Amelia chimes in. “Because it’s just different from the first round. We had protections of masks and lockdowns. But now it’s about a choice. People say, ‘Medical freedom.’ Which - yes. But smallpox, polio – we had to have to eradicate those with vaccines.”

When faced with feelings of skepticism to outright hostility, the sisters add another mental struggle to debate: Are their words worth the heartache?

“I have conflicting thoughts on ‘Do I try to help by sharing credible information and try to help weed out things ... that are being shared that are just misinformation and dangerous to the community?' Or do you shut it off, do you not think about it?" says Olivia.

"That’s been a big dilemma because I’ve also had someone tell me that I am a liar and a fraud based on what I’ve shared. It felt like a slap in the face because I feel like we’re both trying our best just to help educate and spread awareness in the best way I feel like we can.”

These decisions weren’t ones that drew Amelia and Olivia, respectively 29 and 28, to health care. After high school, life took them different directions for a period until they both decided that nursing was where they should be. They enrolled at Cox College and graduated a semester apart.

They both chose to work in Cox South's Medical ICU.

“We would round through the hospital, and whenever we would come up to MICU, it was always just the staff, the coworkers, were always really great. I went through nursing school knowing that’s where I want to go,” recalls Amelia. Olivia, too, knew soon it was where she was meant to be.

“One day of shadowing, I completely, 100%, changed my mind,” she says. “Seeing everything and knowing how great the teamwork is up here. I wanted to get in to work with the sickest patients and learn as much as I could and just do the best that I could. I was extremely nervous about starting in the ICU, but I have no regrets. I’m so glad this is where I started out because I’ve been able to learn so much.”

Part of the reason they chose that area, they say, was the diversity of types of issues that they would get to help with. Another aspect was the care they could give patients in hope of a brighter tomorrow. Patients were very ill, but there was a chance they could be saved. The critically ill COVID patients they now serve do not have that same percentage chance of survival.

“In ICU, you see a lot of death,” says Olivia. “You see the post-cardiac arrests. Traumatic death, even. It’s not like we’re not trained for this. It’s not like we don’t have support for situations like that. It’s that you’re doing everything we can, but it’s not enough.”

The worst part with COVID, in the most dire of cases: “I think it’s watching people slowly die, and there’s nothing we can do to stop it.”

Everything about their realities -- and seemingly, the rest of the world -- changed in March 2020, when CoxHealth saw its first COVID patient.

Amelia was actually one of the nurses who cared for Cox South's first patient suspected to have COVID. The person didn’t end up being sick from the virus, but it was a good trial run for a version of herself who had no idea what was coming. What would she say to herself then, if she could?

“Buckle up, this isn’t the worst.

“The amount of I think procedures and death we’re seeing in the length of a shift is 100% different. We’re just seeing constant demise of patients, and especially with delta. People are getting sicker quicker. So your time frame of getting them intubated, trying to paralyze and prone them is so short. Then they may go into cardiac arrest before you get those things done. Or immediately after and then you have to flip them back over and resuscitate them. And it’s like -- this patient over here needs to be intubated, too. Last night, we were just going from patient to patient to patient to patient.”

Now 18 months into the pandemic, the sisters have spent at least half of their careers in the fight against COVID. The vantage point, as well as leadership positions they both hold as charge nurses, has given them the opportunity to help new nurses join the fight.

"I’m extremely proud of all of the new nurses who have come in because they are so brave," says Olivia. "To be stepping into this role with this many sick patients. Coming back and doing their best and asking questions and learning and growing – and they do it in such a short amount of time, too."

Support for others, though, doesn't mean that they don't need it themselves. And in that, they voice appreciation that they have for each other.

"Even other nurse coworker friends in other areas don’t understand," she says. "You kind of have to work in it to understand what it’s like."

Such realities also tie to another: Concern over people, even health care professionals, who claim to have specialized info and insight into treatment of COVID.

In the unit, she sees patients who have taken drugs like Ivermectin and Hydroxychloroquine to try and treat COVID. They don’t help.

And while the sisters do say they feel the support of most of the community, today is different than days gone by, when health care professionals were not routinely ridiculed or said to be lying when doing their job. Such realities are difficult to forget on the way out the door, even on days when hate-filled social media messages don't come.

"I never thought we’d be here," says Amelia. "I think most of the community supports us, but then you have pockets of people truly believe we’re part of the problem, or supporting big pharma, and it’s just like, we’re literally trying to keep you alive.”