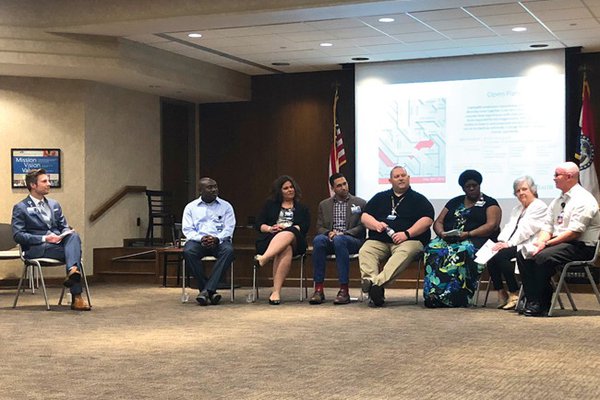 At the end of the 2018 Multicultural and Inclusion Day, Regina Bradford says one thing is clear: This is something everyone needs to see.

Bradford, who works at the Branson West Clinic, says she was surprised at the way the event tackled sensitive issues – around race, sexuality and religion – head-on.

Attendees began the day watching a skit featuring a black man and a white woman in a break room. The topic of conversation was Civil War memorials. It’s an issue people have strong opinions about, which made it the perfect opportunity to consider an opposing viewpoint. After the skit, the discussion opened up to the room.

“This was very honest,” Bradford says. “Usually, no one wants to offend anyone, so you skim over the surface. I loved that they got down to the nitty-gritty immediately.”

The discussion forced everyone to consider an alternative viewpoint, and put themselves in someone else’s shoes.

“People make it seem like things are black and white: you’re biased or you’re not biased. It’s not that simple,” Bradford says. “I thought I was open-minded, but there are a lot of times when I didn’t see things from someone else’s point of view.”

Now in its second year, the Multicultural and Inclusion Day is designed to build empathy and increase understanding, which makes all of us better caregivers.

“CoxHealth is a team and we must treat each other with respect, regardless of what our differences and backgrounds may be,” says Christina Hofmeister, international talent coordinator in Nursing Administration. “In health care, we have to be inclusive and understanding of everyone we come in contact with, whether it is our patients, our colleagues, or someone we meet at the grocery store.”

Kelsey Bagwill, patient experience consultant, says a yearlong experience with AmeriCorps in Boston-area schools had inspired her interest in diversity and inclusion.

“I was so excited to see CoxHealth do this. We have less diversity than in Boston, which is neither good nor bad, it just is,” she says. “People take things for granted and don’t always think about other viewpoints, not because they don’t want to but because they haven’t had to.”

Group exercises illustrated the advantages and disadvantages people face. One called for participants to stand side-by-side on a line. Each had an assigned identity and organizers called out circumstances – like family resources or accidents – that could cause them to move forward or backward.

“It showed how different circumstances can put you far ahead or behind,” Bradford says.

The event also included panel discussions on topics ranging from religion to culture and clinical care.

“I appreciated everyone who sat in front and told us what they faced, based on their religion, race or lifestyle,” Bradford says. “That took guts and it made it personal. They want to make it better for the next person.”

Bagwill says the day made it clear we all need to take time to understand one another.

Considering a new perspective goes far beyond the sometimes loaded words of multiculturalism or diversity.

“Ultimately, this is about considering other people and relating to them better.”