Ron Prenger, from entry-level to executive at CoxHealth 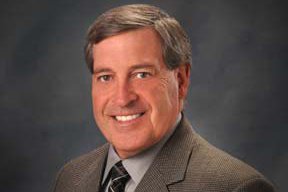 When Ron Prenger came to Springfield in the late 1970s, he had no plans of becoming a hospital administrator. Back then, he was a 20-something student who took a job working as a phlebotomist.

But time changes things, and in Prenger’s case, coming to Springfield left a lasting impact on his life – and on CoxHealth.

More than 40 years later, Prenger is an example of how one can truly go from entry-level to executive at CoxHealth. Now executive vice president and Chief Operating Officer with the health system, Prenger has learned many lessons along the way. Some things that stand out are the value in being willing to try new things, and offering to help when one sees a need.

“CoxHealth has been good to me, and when you enjoy working with the people, you have no reason to look anywhere else,” says Prenger. “It really is a community here.”

Prenger initially came to the Ozarks from the Jefferson City area to be closer to his girlfriend, now wife, who was attending nursing school in Springfield. He went to college at then-Southwest Missouri State University, and started at what was then Lester E. Cox Medical Center working as a phlebotomist.

Back then, things were different: None of CoxHealth’s hospital facilities existed south of Sunshine Street. And in days before CoxHealth had clinics throughout the city and region, most of the activity was contained on today’s Cox North campus. Those facts led to a close-knit, family atmosphere, says Prenger, which he notes still exists.

“I still think we have that family atmosphere that you had back then, even though we’re many times bigger,” he says. “A lot of people who retire and come back keep those memories going.”

His work, an internship, and a degree from SMS in Medical Technology eventually paved the way for his working nights as a medical technologist after graduation.

“I finally got to days,” he says with a smile of the milestone.

Later, it led to his work in a newly created “Reference Lab” that dealt with things such as drug testing. It was a place where Prenger was given the chance to move into leadership, but faced with the opportunity, he felt that he needed to enhance his education.

“That kind of kicked me in a different mode and gear. I didn’t have a business background,” says Prenger. “I decided I needed to take some business classes.”

A combination of those milestones, including getting his MBA from Drury, launched him through a series of career moves. Another event, perhaps seemingly insignificant at the time, helped as well: The moment when he asked another leader, who looked stressed, if he could do something to help.

“I stopped and told him that if there was anything I could do to help him, please let me know,” recalls Prenger. “The next day, he called and said, ‘Were you serious about wanting to help?’”

Prenger confirmed he was.

In 1992, his role grew again, when he was promoted to assistant administrator of Cox North.

Those things were happening in parallel with great growth at CoxHealth. In 1985, Cox South officially opened, effectively doubling the health system’s footprint in Springfield. Within the next decade or so, the health system saw significant expansion and development, including the acquisition of St. Vincent’s Hospital (today, Cox Monett) in 1993 and Oxford HealthCare (now, CoxHealth at Home). The same year, CoxHealth also announced the start of Cox HealthPlans.

Prenger saw it all through a variety of other roles as he served the system and assumed “other duties as assigned.” One of the latter came in the late ‘90s, when he became very involved in the preparation for 2000 and fear of what might happen computer-wise when the new millennium arrived. At the time, the change was causing a lot of concern that computers wouldn’t be able to function as they should.

“We had to work with every single vendor to see what they were doing to address the change, and determine if it had to be a concern for us,” he says. “We had to ensure it was going to be functional as we went through that transition.”

When the day came on Dec. 31, 1999, everyone involved gathered to see if all went as planned, perhaps with some crossed fingers and baited breath.

“And then the year 2000 came and nothing happened,” Prenger says with a laugh.

As he moved through other roles in the system, he saw the system continue to grow. In 2003, the Meyer Center became a reality; in 2004, the Martin Center opened; in 2007, the Wheeler Center began. Other points of growth include the expansion of the system throughout the region, including the addition of the Meyer Orthopedic and Rehabilitation Hospital in 2010, Cox Medical Center Branson in 2013; major expansions of the Cox South campus; and the acquisition of Cox Barton County Hospital in 2018.

In his new role, Prenger is ultimately responsible for supporting Steve Edwards, CoxHealth president and CEO, and making sure that the health system is executing its strategies, and set the health system up for continued success in the future.

It’s a big leap from where he started with CoxHealth – and where he stayed. While there are many things he’s taken away over the years, he shares some advice.

“Always be open to opportunities and volunteer for things,” he says. “Be able to adapt to an opportunity – you never know where it’ll take you.”