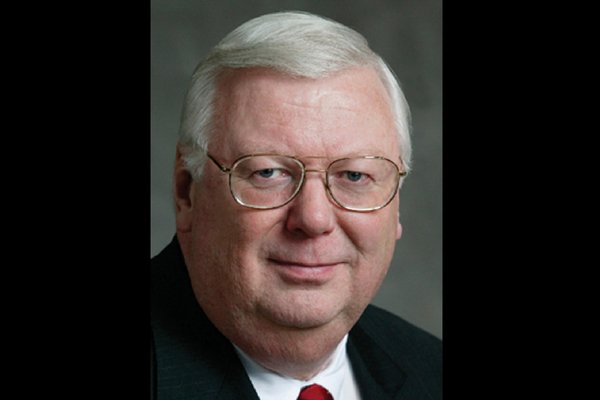 It is with great sadness that we share news of the passing of Robert Bezanson, who served as chief executive officer at CoxHealth from 2004 until his retirement in 2011. Bezanson presided over tremendous growth at CoxHealth and he will be greatly missed.

Below is a version of a piece that originally appeared in CoxHealth Connection in November 2011, as Bezanson was preparing to retire.

When Robert Bezanson wakes up on Jan. 1, 2012, his world will have shifted beneath him. It will be the first time in three decades when he hasn’t had responsibility for CoxHealth as one of the top concerns on his mind. Since he announced his retirement in August, he’s been working on the transition to new leadership and making final preparations to take a step back from an organization he has served since 1981 and helmed as CEO since 2004.

“People have been asking me, ‘What are you going to do?’ and I just say, ‘Anything I want,’” Bezanson says with a chuckle. “It’s going to be fun when the biggest challenge is ‘will I catch a fish at Bennett Springs?’ as opposed to ‘let’s get that contract finalized.’”

As Bezanson prepares to launch his retirement, he’s ready to devote some time to hobbies like fly fishing, wood turning and photography, but he knows he’ll miss the daily efforts both large and small that are required to run a health system.

Over the last 30 years, Bezanson has honed his passion for business in service of the public good into a career that has featured him presiding over much of CoxHealth’s greatest expansion.

His arc, from a new administrator all the way to chief executive officer, parallels the trajectory of Cox from a single Springfield hospital to a multi-hospital system serving a large region. It’s a career marked with milestones – from ribbon cuttings on Medical Mile construction projects to the adoption of organizational foundations such as the Baldrige business model and the strategic plan.

When he first arrived at Cox North for an interview on a rainy day in March of 1981, he wouldn’t have predicted he’d be retiring from CoxHealth in 2011. In fact, he wouldn’t have predicted he’d be here for more than five years. He recalls visiting a field at the end of the interview and peering into the freshly excavated void that is now the foundation of Cox South. He had interviews at hospitals across the country, but there was something about the people here and the potential to get in on the ground floor of a growing system that led him to take a chance.

“When I met Neil Wortley, Charlie Edwards and Larry Wallis, I knew I really wanted to work with those individuals,” he says. “There was a management team that was a great fit and there was a hospital that was looking to the future and building a new facility. 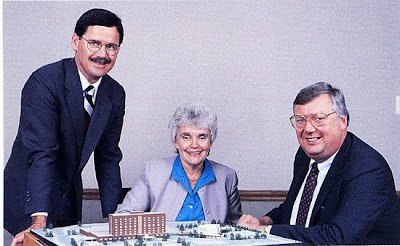 Bezanson’s path to being a health care administrator had begun 12 years earlier. As the Vietnam draft started in 1969, Bezanson, like other men of his generation, knew he’d be serving, it was just a matter of where. He had a business degree and he decided to apply for a direct commission in the Medical Service Corps.

“I was very fortunate. Hospital administration wasn’t something I originally aspired to, but it was an area that presented itself and I took the opportunity,” he says. “As I got into it, I realized that it was a very rewarding career.”

Bezanson had a mentor who encouraged him to pursue a master’s in health care administration, which he did at Washington University in St. Louis. During that time, he did a residency at Barnes-Jewish Hospital, where he fell in love with the operations of a large hospital system.

After three more years of service to repay his Air Force-sponsored education, Bezanson started looking for his first job. Southwest Missouri hadn’t been on his radar before his interview, but the chance to grow with a health system was inspiring.

“At Cox, I saw opportunities for learning about new construction and that’s not something you always get the chance to do early in your career,” he says. “I felt like I could learn something here.”

He figured he could work at Cox for two or three years and move on to other challenges. Soon, new challenges here began to pique his interest. The direction of South shifted from a 220-bed women’s and children’s hospital to a 500-bed tertiary care center. When the facility was finished, Bezanson joined administrator Larry Wallis in opening the new hospital. One year later, he was offered the position of administrator of Cox South. That offer changed everything.

“For me, that job was a dream position,” Bezanson says. “That’s when I realized I really could be a change agent for health care in southwest Missouri.” 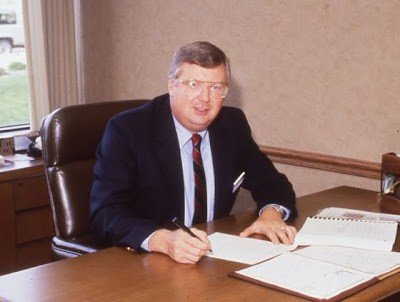 In the early days of Bezanson’s time as administrator, Cox South became a competitive tertiary care center with capabilities that rivaled hospital systems around the nation.

Bezanson had hoped for a learning experience when he accepted the job and he soon found many opportunities. From the beginning, he was taking on new challenges and finding his way in uncharted territory. He presided over a number of firsts for Cox that now stand out in his mind, including:

As Bezanson’s career grew, he found new opportunities to use his business acumen to drive ongoing improvements in patient care.

In the late 1980s, Cox helped bring the first outpatient MRI service to Springfield with Ozark Magnetic Imaging, a joint venture with St. John’s. Looking back, Bezanson is especially proud of how that partnership served a community need in a cost-effective way. He credits much of the project’s success to careful planning and a strong business agreement. The project also illustrates what he says is one of the biggest lessons of his career.

“If you enter a project with another partner, you need to make sure your partner has the same values and they’re in it for the same reason,” he says. “There has to be an alignment of values, just like a marriage.”

Forming successful partnerships and negotiating business agreements has been as vital to Cox’s growth over the last three decades as any of the new services or facilities brought on line. When he speaks about his work, it’s clear that Bezanson’s passion for a good deal is driven by the positive outcomes for people – both our patients and our staff.

“There’s so much that goes on in administration that the person on the front line might not be aware of,” he says. “You have to remain focused and try to do the best you can for the patient and for employees; you can never forget that.”

He points to the partnership with Ferrell-Duncan Clinic in 1996 and the 1998 acquisition of Columbia HCA, which became Cox Walnut Lawn. In both cases, leaders were able to smoothly transition the employees into Cox.

“We managed to transfer all of those employees and keep them whole,” he says. “I’m proud of that and I think we did a great job.”

Since he became CEO in 2004, Bezanson’s career has been notable for the new construction he has led. He earned the local moniker of “Bob the Builder” as he presided over the opening of the Cox Surgery Center, the Meyer Orthopedic Center, the Cox South Emergency Department and, most recently, the critical care expansion at Cox South.

“Every ribbon cutting has been pivotal,” he says. 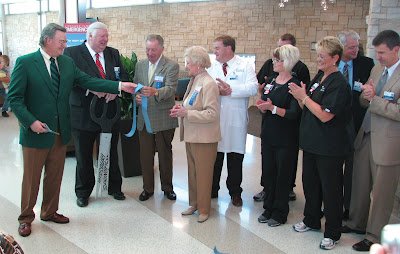 While each of those expansions are visual landmarks of CoxHealth’s growth, their power lies in something much deeper than bricks and mortar. The projects Bezanson has led – from new facilities to partnerships like the Clinic at Walmart – have all been based in the desire that has driven his career: to make a difference in people’s lives.

That desire is also clear when Bezanson discusses what it has meant to serve as a leader for employees.

“At employee orientation, I always tell new employees, ‘We hope to be your last employer,’” he says. “Our culture cares about the employees; we truly are a family. We believe in promoting from within; I’m a perfect example of that.”

A high point of his career was participating in CoxHealth’s centennial celebration in 2006. At the time, he had been present for one quarter of the hospital’s history. He’s proud of being a leader for the CoxHealth family and being an advocate for change within the system, even when that change wasn’t easy.

“It was a bold move to go smoke free, but it was the right thing to do,” he says. “ETO was initially controversial, but it was quickly embraced as people had more control over their time.”

He also mentions the importance of employee engagement and the value he sees in the We Want to Know survey.

“If you don’t ask them, you won’t know what’s important to employees,” he says. “You’ll never know where to set your priorities. I’m glad we’ve been able to do that and we’re still doing it every year.” 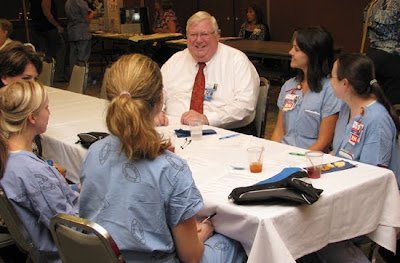 Predicting the future can be tricky, especially in a field that evolves as rapidly as health care. The prospect of growth inspired Bezanson during his 1981 interview, but it would have been impossible to imagine where Cox would be in 2011. Seeing the future is just as difficult, but Bezanson does have a sort of secret weapon.

“See my crystal ball?” He gestures to a glass globe perched on a bookshelf across his office. “Now you’ve seen the secret of Bezanson; he’s got a crystal ball in his office!

“Someone gave me that crystal ball when I started this job and let me tell you, it doesn’t work nearly as well as it should,” he says with a grin.

Whatever changes may come, Bezanson says CoxHealth has the advantage of a clear vision that will guide all of our decisions.

“We don’t make widgets, we take care of people when they’re at their most vulnerable,” he says. “Our work is about people and taking care of their needs. In the end, it’s all about the patient.”

Bezanson says he’s proud to be leaving CoxHealth with a strong framework that will allow us to provide the best care for our patients in the coming years.

“When I came into this position, I encouraged management to embrace a Baldrige model and the foundation is now in place for that,” he says. “We’re moving forward with deploying a lot of the components of Baldrige, which will make this an even better organization.”

Just as the past three decades have grown from the foundation being poured in a field during his first interview, Bezanson says the future of CoxHealth will be built on the work being done today by everyone who serves the organization. He says his greatest accomplishment of the last 30 years can be seen in the management team he’s developed – a team he knows has the health system well prepared for future challenges.

“I’m extraordinarily proud of being associated with CoxHealth. I know it sounds corny, but you really are only as good as the people around you,” Bezanson says. “Eighty percent of management is who you hire and we have a great team in place. That is what I’m most proud of. It’s not the buildings, it’s the people.”