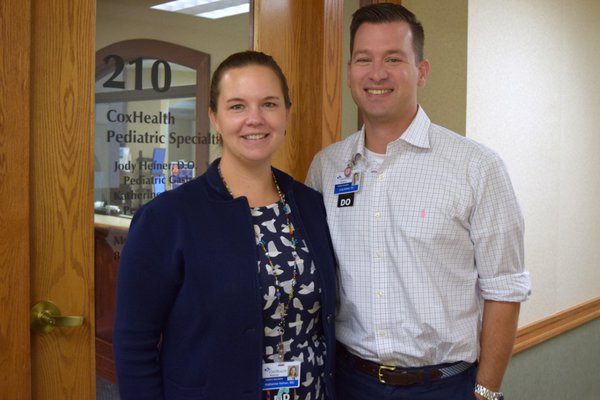 Dr. Jody Hefner – and his wife, Dr. Kate Hefner – moved to Missouri for a number of reasons.

One was family; Dr. Jody is originally from Ozark, where his parents still live. The couple was also looking to put down roots, which their military backgrounds hadn’t previously allowed.

But there was another reason, too: They wanted to help patients in this region.

As pediatric specialists – Dr. Jody is a gastroenterologist, while Dr. Kate is an endocrinologist – the couple’s move launched two new pediatric specialties at CoxHealth, offering even more care close to home for young patients and their families.

“Both of us felt it was a natural choice,” says Dr. Kate. “I feel we really wanted to make a difference for patients.”

Both of the Hefners’ backgrounds have uniquely prepared them for their start at CoxHealth.

Dr. Jody has known of CoxHealth all his life, having grown up right down the road – and from his mother’s job as a critical care nurse at CoxHealth years ago. Additionally, his father was a pharmacist in Ozark.

“I guess you could say medicine was in our genes,” he says.

Dr. Kate is originally from the East Coast, and knew from an early age that she wanted to go into medicine.

“I was just always drawn to it,” she says. “I’d have my Barbies, and play with them as if they were treating patients in the ICU.”

Eventually, the doctors graduated from college and made their way to Walter Reed National Military Medical Center in Maryland, where they continued their medical training.

There they met, married, and were eventually deployed to Iraq (and later, for Dr. Jody, Kuwait). After coming back to the United States, they transitioned from active duty to the Army Reserves.

They also decided that – with two young children at home – it was time to put down roots.

“We never had a chance to do that because we never knew how long we were going to be somewhere,” says Dr. Kate.

The opportunity to do that for the first time led them to Springfield.

Since starting their practices in August, the doctors have seen great enthusiasm from local patients. Given the nature of their specialties, both of the Hefners see patients on an ongoing basis, adding another layer of benefit for families who have appointments several times a year.

“We’ve already had people be very excited that they don’t have to travel to Kansas City or St. Louis for treatment,” says Dr. Jody.

Both of the Hefners voice the satisfaction that comes from the relationships that they’re forming with patients. In endocrinology, that might be the management of diabetes or other hormonal issues; for gastroenterology, conditions include Celiac disease, Irritable Bowel Syndrome or digestive problems.

“I really value the relationships we have with these kids and their families,” says Dr. Kate, a sentiment seconded by her husband.

“Forming a good relationship with the patients is rewarding,” he says. “It makes you feel good that you can be part of making a difference for these families.”

To make an appointment with one of the Hefners, please call CoxHealth Pediatric Specialties at 417-269-1010. CoxHealth also offers specialty pediatric treatment in more than 20 areas, and recently expanded to also include neurology.