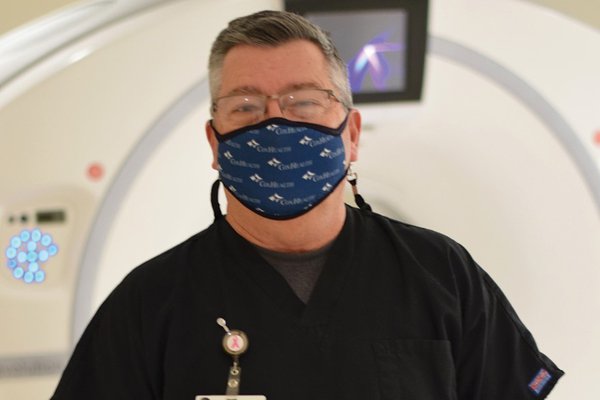 Pat Blamey remembers what stood out to him when he interviewed at what was then St. Vincent’s Hospital Monett in 1986: the small-town atmosphere, and the potential for growth.

He was on the fence about taking the job as radiology supervisor, but those two things led him to take a chance.

He has seen decades of change, and now he is seeing the hospital realize its full potential.

“It has been the greatest thing in the last 10-12 years to see Cox Monett take off the way we knew it could,” he says.

Over the years, Radiology’s services have expanded far beyond the space and design of the original Cox Monett hospital. As technology grew, the department had been forced to improvise: the MRI was located in a truck, the CT scanner was outside the department, bone density scans were conducted in other parts of the hospital.

“We were so scattered before. This is a big advantage for us to have everything centrally located in one area,” Blamey says.

Now, the MRI is in house and fully digital X-Ray equipment is nearby.

A 64-slice CT scanner is right down the hall from the ED. The ED also has its own portable X-Ray unit.

“That will make a huge difference in response time,” Blamey says.

Among the other major changes:

Blamey says the improvements will mean better care, and the new location will mean more visibility and access for patients.

“It is nice to have it out here, where it is so easy to get to. Especially for patients who may have gone elsewhere. This is the perfect opportunity for them to give us a chance.”

Sometimes taking a chance is all it takes to seize an opportunity, for your own career or for a community.

“This has been a long time coming, and yet at the same time this had gone by quickly,” Blamey says, reflecting on his years at Cox Monett. “We’ll be able to attract employees and doctors, people who want to get in a rural community and make a difference,” he says. “They will see that we are invested and we want to improve lives as well.”