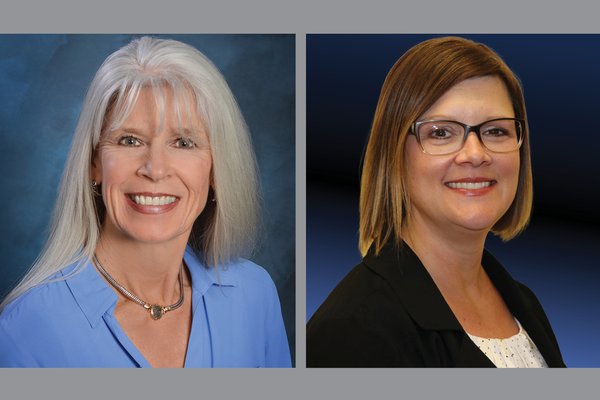 Both leaders have served in their roles on an interim basis since November of last year and accepted the position permanently this month. They each bring 18 years of experience to their role, along with a strong passion for nursing.

Heidi Clark began her career in Monett as a house supervisor and was later named nursing manager of the emergency department. While she briefly left Cox Monett Hospital for another role in the system, she returned in the fall of 2022 to serve as the facility's interim nursing director.

"We are excited that Heidi has brought her passion for quality, rural health care home," says Andrea McKay, president of Cox Monett Hospital. "She is a dynamic leader who excels at building relationships and fostering a culture of clinical excellence to ensure safe, patient-centered care continues to be delivered at one of the best critical access hospitals in the nation."

Jenny Watts joined Cox Barton County Hospital in January 2021 as the nursing manager of the medical-surgical unit and emergency room. Watts has held several leadership positions throughout her career, and when the previous administrative director of nursing transferred to another role within CoxHealth, Watts was chosen to fill the position at Cox Barton County.

"Jenny has proved her capacity to support and lead our nursing staff through some hard times with collaboration and teamwork," says Chris Wyatt, president of Cox Barton County Hospital. "You can see her passion for nursing from her early work as a bedside nurse, and it's evident in the way our nurses take great satisfaction in providing compassionate, individualized care."

Clark and Watts will each be responsible for the leadership of all nursing functions across the hospitals.

Both Cox Monett Hospital and Cox Barton County Hospital are award-winning facilities. Last year, Cox Monett received a 5-star quality rating from the Centers for Medicare and Medicaid Services (CMS), which is the highest possible achievement in CMS’s overall quality ratings. Additionally, Cox Barton was named to the National Rural Health Association’s Top 20 list of critical access hospitals for quality care in the nation in 2022.