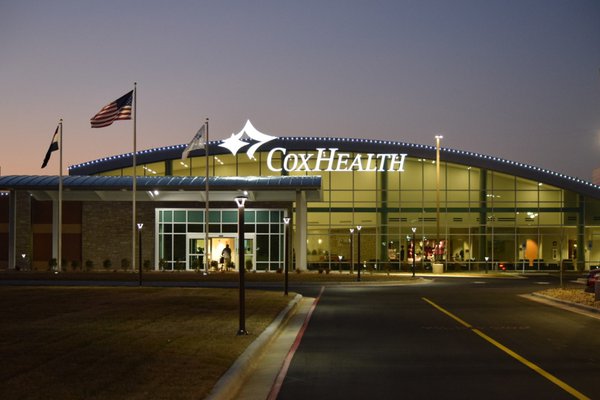 Anticipation, dedication and a lot of hard work have officially accomplished an effort years in the making: The new Cox Monett Hospital, which opened Jan. 22 at 6 p.m.

“We are so excited about what this investment means in our community, and the level of health care we can offer to Monett and the surrounding area,” says Darren Bass, president of Cox Monett Hospital. “This dream has been in the works for many years, and has taken a great deal of teamwork to bring to fruition. Offering top-level care that is accessible right here at home is something that we are proud to share with our friends and neighbors."

Designed as a critical-access hospital, Cox Monett fills an important role in patient care, especially with regard to strokes, heart attacks and traumas. In these events, hospital employees are trained to stabilize patients before they are sent to other facilities for higher levels of treatment.

“Our staff’s ability to step in when moments count can be extremely important in long-term outcomes for patients,” says Bass. “Being able to recognize what’s going on, and administer medication or certain treatments, can make a difference between a good outcome and one we don’t wish to see.”

The hospital starts a new chapter for health care in the community, which has a legacy dating to 1914, when Dr. William West opened a hospital for patients in Monett. Eventually, his hospital was donated to the Vincentian Sisters of Charity in 1943, and became known as St. Vincent’s Hospital. In 1993, it became part of CoxHealth.
The new facility replaces the former hospital, which was built in 1953. Plans for the building are still in the works but will be announced soon.
It took approximately 21 months to complete the new hospital after ground was broken in May 2019. Of the $42 million required for the new hospital’s construction, approximately $7 million was given by community donors.

“This day is a significant one for CoxHealth. Most of our patients live in rural areas, so we are extremely committed to investing in facilities throughout our region,” says Steve Edwards, president and CEO of CoxHealth. “I am excited for this day, and proud of the staff who do an exceptional job caring for patients in Monett. Their life-saving and life-changing work is really what health care is all about. I am also extremely grateful for the generosity of this community that helped bring the new hospital to fruition.”

More than 212 contributors donated to the Cox Monett Momentum Campaign, which was led by community leaders Judge Mike Garrett and Jack Prim, and overseen by the CoxHealth Foundation.

“The generosity of donors in Monett has been overwhelming,” says Lisa Alexander, president of the CoxHealth Foundation. “It is touching to see the hundreds of individuals who came together, regardless of the size of their donation, to help make this hospital a reality for their community. I am inspired by them, and so excited about this facility and how it will make lives better.”

Cox Monett is only one of six hospitals that are part of CoxHealth. Others include Cox South, Cox North and Meyer Orthopedic and Rehabilitation Hospital in Springfield, Cox Barton County Hospital in Lamar, and Cox Medical Center Branson.