My life with Multiple Sclerosis: 'Everything happens for a reason' 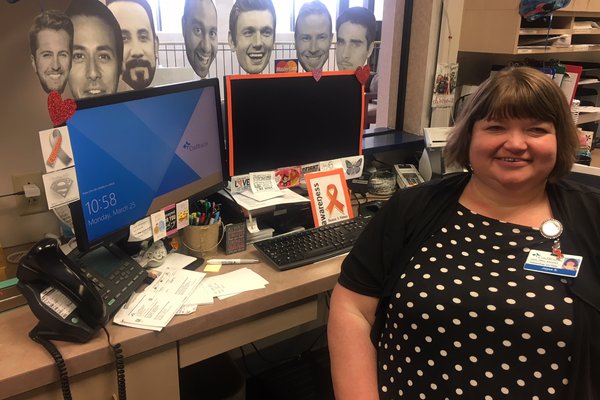 Joyce Sorokes was enjoying a game of mini golf with her family four years ago when life as she knew it turned upside down.

“I reached to get the ball out of the hole, and I suddenly collapsed,” says Sorokes, who works at Cox Branson’s Sleep & Pulmonology clinic. “My muscles were so weak, I couldn’t even stand up. My husband and son had to carry me through the rest of the course.”

Sorokes thought it was bad allergies causing her dizzy spell. However, even after getting allergy shots, her body kept getting worse. “All of a sudden, there was tingling and numbness in my arms and legs. I couldn’t even write anymore.”

By the next month, she developed what’s known as the “MS hug.” “It’s a band around my ribcage that squeezes constantly – tighter and tighter,” she explains. “I’ve had it ever since. It feels like I’m getting squished -- almost like it’s going to crush my ribs.”

An official diagnosis of Multiple Sclerosis wouldn’t come until almost four months later after MRIs of her brain and spine confirmed Sorokes had active MS lesions on both locations.

But, there was no time for a pity party. “I had always been the strong one in my family who people counted on, but here I was unable to do anything for myself. Everyone was crying to me about who they would turn to now. I knew I just had to buck up and be brave.”

She began a trial period to find a medication that worked for her – starting first with self-injections, but she currently takes infusions to keep the lesions stable. That means that her current symptoms – which include numbness, double vision, trouble walking and swallowing – won’t get better, but they aren’t expected to get worse.

Sorokes has always been a Godly woman who never once got bitter at Him for her disease. “I know he gave it to me for a reason,” she says. “What that reason is – I’m still figuring that out.”

She does believe she was called upon to help others with MS by starting a support group at Cox Branson. “When I was first diagnosed, it was so important for me to vent to people who understood exactly what I was going through,” she says. “They understand the medicine and the side effects. My family and friends are very loving, but there’s just no way they could ever understand what I’m experiencing.”

Sorokes, who’s known as the “Gatekeeper” at work because no one gets into the clinic without seeing her first, admits it’s hard sometimes to stay in a positive mindset.

“Sometimes, I cry myself to sleep because I feel like I can’t take it anymore. Then, I tell myself I can’t turn into that bitter person because once I get there, there’s no going back,” she says. “Sometimes, that means I have to give myself a pep talk just to get up and dressed each day. I don’t want to be a hermit – I want to keep seeing the faces of our patients.”

It’s the little things in life she’s realizing now she took for granted before her diagnosis.

“Just taking a shower is so hard. When a patient is diagnosed with MS, their idea of normal is turned topsy-turvy and you just have to adjust accordingly.”

Her beloved co-workers at the Pulmonology & Sleep clinic, who recently decorated her work area with motivational signs and butterflies for MS Awareness Month, have helped her make that adjustment.

“They’ve been absolutely incredible. Simply amazing,” she says. “These lovely ladies and gentlemen have gone above and beyond to help me. It’s a day-to-day situation. They never know how I’m going to be because I never know myself how I’m going to be. They make sure I keep moving. They make me do things. They don’t let me be prideful. They are so strong for me that it makes me stronger.”

Those co-workers teamed up with Sorokes’ friends and family a few years ago for a benefit to raise money to help with medical bills – the event raised $7,500.

“Our Joyce has a remarkable determination and undaunted spirit,” says Ronda Gray, clinic manager for Pulmonology & Sleep. “At a point in her disease when many people would have given up on their career, she went back to school to become a certified medical coder and was the top student in her class at OTC. She has been a wealth of information and a source of inspiration and pride to me and others in our office. She is a woman who has MS, but she will never be a woman who is defined by MS.”

“She may have had a rough night with her MS but you would never know it,” says Marjorie Suscheck, a co-worker at the clinic. “She puts aside her pain and misery from MS and puts on a solid front for the patients. “

Moving forward, Sorokes has one tip for all of us.

“Remember to be kind to each other. You just never know the struggle someone may be going through.”

The MS Support group meets the third Thursday of every month from  5:30 to 6:30 p.m. in the cafeteria at Cox Branson. For more information, email Sorokes at Joyce.Sorokes@coxhealth.com