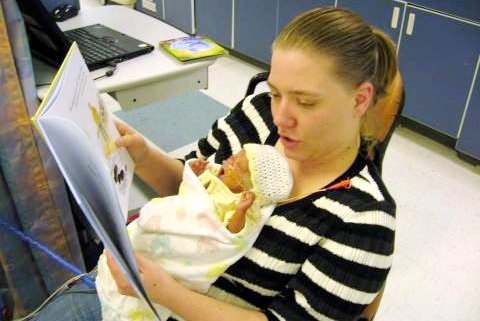 Before becoming a mom, April Gensler didn’t know how much of an impact books would have on her life.

But when her daughter, Amelia, was born at only 24 weeks old, reading books to her was the only way she could connect with her baby. “When I came back to the NICU, the nurse presented me with a book with my daughter's footprints inside,” says April. “She told me I could read softly to her.”

Amelia’s book was presented as part of the Books for Babies program, which has been operated from CoxHealth’s NICU for more than 20 years. Each baby is presented with a book, stamped with the baby’s footprints, and the baby’s parents are encouraged to read it to their child. Reading allows bonding to occur – because for some parents like April, even touching their baby isn’t an option.

“I wasn't even allowed to caress her because it could overstimulate,” says April, since Amelia’s skin wasn’t fully developed. “Reading was all I had. The only thing I could do.”

So that’s what she did.

With no other children at home, April would spend hours upon hours at the NICU, reading to Amelia from the NICU’s library. “She got stronger and stronger, but it was three months before I could hold my baby girl against my chest,” recalls April. “By that point though, reading was our ‘thing’ and it continued.”

Tragically, Amelia was just born too early: On Feb. 28, 2011, she passed away 155 days after her birth. But today, her mother is raising money to support the program that brought so many good memories to her time with Amelia. And although she’d love to see the funds to purchase as many books as possible, her goal is to get at least 155 – one for each day of her daughter’s life. “I just want to honor her life,” says April. “She fought every day to live. She was so strong. I want to carry that on. I want to give back to the programs that gave so much to us.”

April is asking the community to help: Monetary donations may be made until Nov. 20 via You Caring, a crowdsourcing site, which will allow books to be purchased at wholesale prices and given to babies in the NICU.

“I think it is the most beneficial program for a parent/baby in the NICU because you aren't able to care for your child like everyone else does,” says April. “All you have is your voice to give them, but so many people, including me, have a hard time finding the words especially considering the extremely emotional and stressful setting. But books gave us words when we had none.”