'Mask up for me' One woman's COVID-19 experience 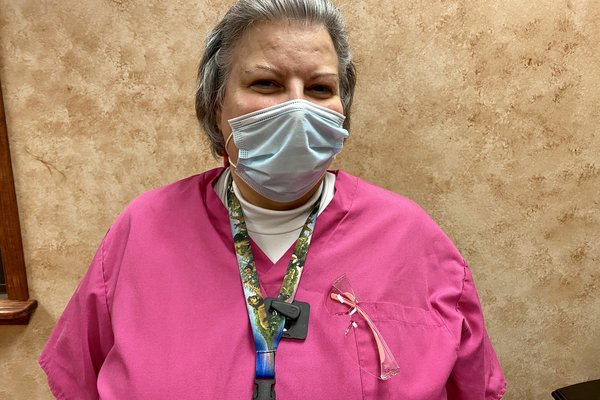 Sterett Hollenbach hadn’t called in sick a single day in her 16 years at Cox Branson until this April when she was diagnosed with COVID-19, the same virus that would kill her mother a few weeks later.

Sterett got the call on April 2 that she’d been exposed. By the next day, the fever set in and she was tested for COVID-19.

“I just kept thinking it was going to be fine,” says Hollenbach, a CT Technologist at the medical center. “I just thought it would be another little bug to fight off.”

By the time the test came back positive two days later, Hollenbach had been in self-quarantine and her symptoms were getting much worse.

“I had lost my sense of taste, wasn’t hungry, and flu-like symptoms were coming on strong,” she recalls. “I remember being so tired I could hardly function.”

She thought she would recover after a few days of rest, but that’s when she began to experience shortness of breath, a symptom that really scared her.

“I couldn’t even walk up the stairs at home. I’d have to sit down after crossing the room,” she says. “I remember going into the shower but running out of energy after washing my hair. I’d just grab and towel and collapse on my bed.”

She went to the ER because the symptoms weren’t easing up. She received supplemental oxygen to help with her recovery at home.  During the early days of her diagnosis, her 84-year old mother Ellen had been taking care of her.

“You can’t tell a mom not to take care of her child. That’s their instinct. It’s just what moms do,” she says with a pause. “She was a bit stubborn and wanted to keep checking on me and make sure I had everything I needed.”

Ellen, too, began to experience shortness of breath, so Sterett’s husband took her to the hospital. A COVID test confirmed that she, too, had the virus.

During a follow-up appointment, a chest X-ray showed her lungs were so riddled with the virus that they looked like snow. She had additional lab work and scans. A CT revealed another dangerous complication of COVID-19: blood clots in her lungs, resulting in admission to the hospital.

By the time Sterett was admitted in the hospital, her mother was already on a ventilator.

“I can’t tell you how awful that was,” she says. “I was sick myself and was trying to make hard decisions over phone calls and FaceTime. Nothing prepares you for that.”

Sterett was discharged after one day in the hospital. At the time, Ellen was still on life support.

“She didn’t make it. I will always have guilt over that. I feel like I killed my mother because I gave her the virus,” Sterett says. “Truth is, I probably exposed her before I even knew I had it myself. Still, it’s really hard to think about.”

Sterett says her mom was “everybody’s” mom. “My work girls loved her, too, and fell apart when she passed. She helps put a face on COVID-19, and it’s my hope that people will take care of each other so no one else has to go through this.”

Sterett, who says she’ll look for cardinals as a sign from her mom, is still on blood thinners to keep her blood clots in check. She returned to work the day after Memorial Day. More than ever, she is an advocate for masking, as she believes it can help keep the virus from spreading to others, potentially saving lives.

“I can talk until I’m blue in the face about the importance of wearing a mask, but some people will never change their mind,” she says. “I know they’re uncomfortable sometimes, but they are so, so, so important. If you’re not worried about yourself, please worry about others and do what you can to protect them. Mask up for me. Mask up for my mom.”