Mammo-why: Mindy Having shares her story 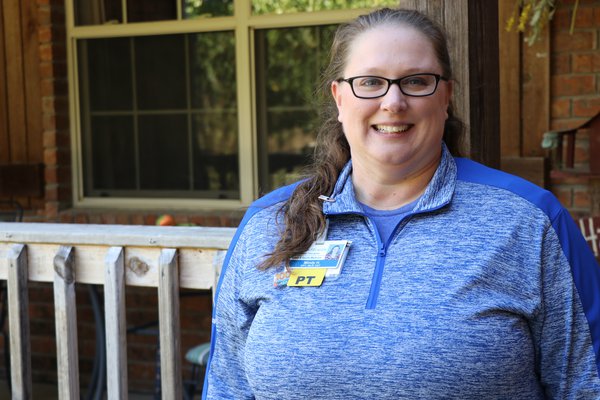 Mindy Having, physical therapist at Cox Rehab and Sports Medicine in Monett, often reminisces about her aunt and grandmother. Both women were diagnosed with breast cancer, which ultimately took their lives. Mindy has fond memories of them – and often wonders if things could have turned out differently today.

“Breast cancer came out of nowhere and took my aunt’s life very rapidly at a young age,” she said.  “She never got a chance to enjoy life as a newlywed or to even have children.”

Years later, Mindy’s grandmother was diagnosed with breast cancer in its late stages.

“My brother and I would spend every Friday night with my grandparents,” she said.  “Her cancer diagnosis was a huge blow to my family because they were an integral part of our lives.”

Mindy’s grandmother was given six months to live, but she fought hard and survived 18 months. Watching her grandmother fight the battle lead Mindy to her career choice of becoming a physical therapist specializing in cancer fatigue.

“My aunt and grandmother’s diagnosis of breast cancer brought about a diligence for the women in my family to openly discuss breast health and the importance of screening mammograms,” she said.  “My passion comes from knowing that a mammogram can detect something before you can even feel it—ultimately that can save your life.”

In 2006, Mindy did find a lump in her breast. Thanks to awareness and quick action on her part, however, everything turned out okay.

Mindy says the number one reason she gets a yearly mammogram is because of her three children.  She said she fully intends to watch them grow, get married and looks forward to the day that she can rock beautiful grandbabies.

“Even if cancer does rear its ugly head, I will be one step ahead because I am adamant about having a yearly mammogram,” she says.