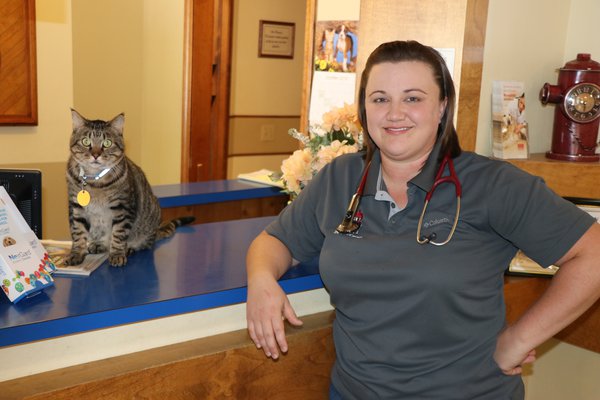 Erin Carnes fell in love with the outdoors and animals at an early age.  When you combine the love of her two favorite things, what you get is an outgoing, dedicated veterinarian practicing in her hometown.

Erin knew growing up that her dad’s side of the family had a history of cancer. While attending college at the University of Missouri in Columbia, she woke up one morning in excruciating pain. Her husband Zach, who is now the clinical excellence coordinator at Cox Monett, drove her to the emergency room where tests revealed a 7x7 cyst on her right ovary, which surgeons successfully removed.

That discovery led to a new question: Did Erin have the BRCA1 gene?

BRCA1 and BRCA2 are human genes that produce tumor suppressor proteins.  Women who have inherited mutations in these genes are at greater risk of developing breast cancer and ovarian cancer compared to the general population.

“My sister and I made the decision to meet with a genetic counselor at Cox South, so we went in as a family,” she says. “At age 23, I tested positive for the BRCA1 gene, but my sister was negative.”

It was recommended that Erin complete a screening mammogram and tests every six months, starting at the age of 25.

“Every six months as I am tested, I’m reminded of how blessed I am to have the most advanced diagnostic imaging available that can detect even the slightest abnormalities,” she says. “I am confident that if my tests reveal something—it will be in the early stages.”

Those beliefs rang true in 2016, when Erin’s mother was diagnosed with breast cancer – the side of her family that had no history of cancer. Her mom’s cancer was found through a mammogram at an early stage.

Erin urges all women to perform monthly breast self-exams and to perform the exam the same way every month. She also urges women to get their yearly mammograms because she understands firsthand how it saves lives.

“I’m looking forward to living a full life with my family and keeping all the animals that I care for happy and healthy,” she says.