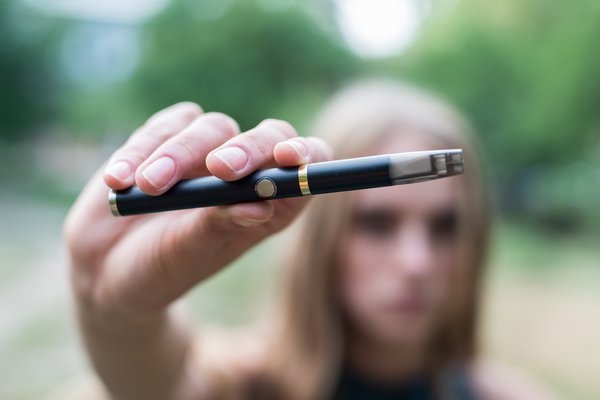 The U.S. Food and Drug Administration says vaping among teens has exploded into a full-blown epidemic with 75 percent more youth trying e-cigarettes compared to this time a year ago. Unfortunately, it’s a trend gaining steam right here in the Ozarks.

Two local teens sat down with a representative from CoxHealth for a candid discussion about how easily they access the flavored vape and vape devices such as JUUL, Smok and Sorian Air.

The students, who we will refer to as Sarah and Todd to protect their identities, admit they never realized vaping would lead to a nicotine addiction.

“I’ve had an occasional cigarette when hanging out with my friends, but it always made me feel gross because I know the dangers,” says Todd, a high school freshman. “But Juuling was different. It looked cooler and didn’t smell. I was hooked from the first time I tried it.”

Hooked because most vaping pods contain up to 50-percent nicotine, the addictive ingredient in cigarettes. Sarah also didn’t realize how addictive vaping would be, but says she was enticed to try it because of the fun flavors and easy access to buy it.

“No one pressured me to try it. It was my idea. I was drawn to the flavors like mint and mango,” she says. “Before I knew it, I needed to vape more and more to get that buzz.”

Both teens admit that a “shocking amount” of students are vaping, even while at school. In fact, Todd says many students now refer to the restrooms as “vaping rooms” because that’s where groups go throughout the day to use their devices.

“You’d be really surprised,” he says. “And, it’s not only so-called ‘bad’ kids doing it. Even well-behaved jocks are Juuling. My guess would be out of a class of 25, there’s about half who own some sort of vape.”

Sarah agrees. “Kids are even vaping in class. They hide it in their sleeve and ghost it through the day.” Ghosting refers to inhaling the vape and holding it in so it’s virtually undetectable. “They pretty much keep it in their shirt and suck on it all day,” she says.

Area school administrators recognize the problem and make tackling the trend a priority. “We are vigilant in our supervision of high school students and the use of these devices is prohibited on all our school campuses,” said Jack Harris, principal at Branson High School.  “The topic of vaping and its harmful effects is discussed through many platforms in our school. We encourage parents to closely monitor their students and join forces with us to inform students of the dangers of vaping.”

“Vaping is becoming a more prevalent issue in our schools,” said Brad Swofford, superintendent of the Branson School District. “Vaping devices are small and easy to conceal, along with the fact that they don’t need a lighter and are odorless, and difficult to detect on a student.”

While vaping can be hard to detect at school, it can be even harder to detect at home. Sarah’s mom says she had no idea her daughter was vaping until she developed a chronic cough. “I knew something had to be wrong because she had a cough that just kept getting worse,” says Sarah’s mother. “But I didn’t know the truth until she was suspended from school after another student saved a screenshot of my daughter vaping on Snapchat.”

Sarah’s mom even saw the device in her daughter’s backpack on several occasions but says it looked like a flash drive or a box of pencil lead with Minions on it. “It looked like school supplies. I had no idea it was a vaping device.”

Sarah says even after her mother found out, that didn’t stop her from Juuling. “It was actually the cost that made me quit,” she explains. “Pods are about twenty bucks a piece, so I had to make the decision to buy gas for the car or vape pods. I chose gas.”

Sarah’s mom has some advice to parents: “Look at your child’s bank transactions. I saw that she was buying these pods at a local vape shop, so I knew she hadn’t quit. Just talk to your child about the dangers of this. Keep those lines of communication open.”

It’s no secret that it’s hard for anyone to snuff out a nicotine addiction. Jim Brawner, CoxHeatlh smoking cessation expert, has helped hundreds of people quit smoking through his program. “I speak to schools in southwest Missouri to raise educated awareness,” Brawner says. “The person has to have a very strong ‘why’ for wanting to quit.  Teens often think they are bulletproof and do not see the long-term consequences.  Getting others who have become addicted and succeeded in quitting to share their story of overcoming the habit is effective.  I know that success is best for them when taken on by a peer-led tobacco cessation plan.”

As Sarah mentioned, her “why” for quitting was the cost. For Todd, he noticed physical changes in himself.

“I just started to feel too reliant on it,” he explains. “Waiting for that next fix started to take over my mind. I hated that feeling of being out of control, so I quit cold turkey and never looked back.”

The teens have advice to their peers who vape:  “It’s not worth it,” says Sarah. “They need to think of the big picture about their health down the road. We learned from the time we were little kids how harmful cigarettes are. This stuff (vaping) is just as bad. I hope you give it up.”