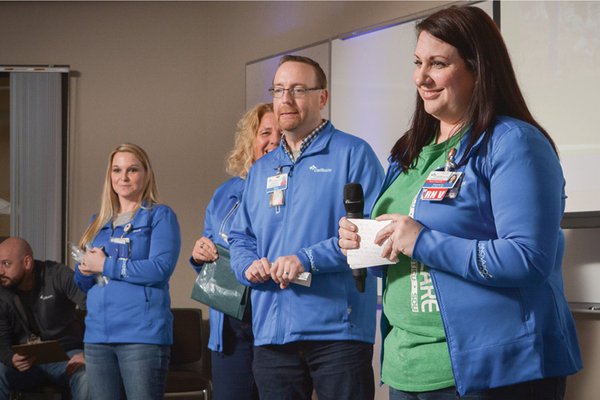 Dozens of CoxHealth team members laid the groundwork for innovations -- and had a great time doing it.

One minute is not much time.

That becomes obvious when you develop an idea for CoxHealth’s Innovation Accelerator.

You’re asked to create something that will change the way we provide care in the next 20 years. You need research, you need a business case and you need to know how your idea could be put into place.

You have one minute to get a room full of people on your side. And that is just the first challenge of the Innovation Accelerator.

Earlier this year, I got to spend two days with more than 50 of our colleagues who brought their best ideas to our third Innovation Accelerator event. Over 18 hours, we formed teams, brainstormed, honed ideas and prepared our best pitches for a panel of CoxHealth and community leaders.

Working within the time limitations forces you to trim everything down to the essentials. CoxHealth board chairman Dennis Heim coached our team with this advice: “If people only took away one thing from your pitch, what would it be? If they got a second point, what would that be?”

We could think of a third, he said, but people aren’t likely to remember it anyway.

After two days, here are three takeaways from the Innovation Accelerator experience:

1. The event lives up to the hype – This is a rare chance to work alongside colleagues you may never have met in a focused, challenging and fun way.

2. This is where our future comes from – The accelerator forces you to think strategically, far outside of the usual tasks we all focus on each day.

3. Everyone can play a role – If you have an idea for an innovation, start working now and make plans to participate next year.

The Innovation Accelerator is a rewarding process that mixes big ideas (all the things we could do) with execution (what can we do to make this deadline?). It takes a team effort to make it happen.

Scott Rogers, system director of performance integration and innovation, and ringmaster of the Innovation Accelerator, warned us at the beginning: “At 1 p.m. (the time of the first pitches), you will wonder why you signed up for this. By 5, you will be so glad you did.”

He was right on both counts. 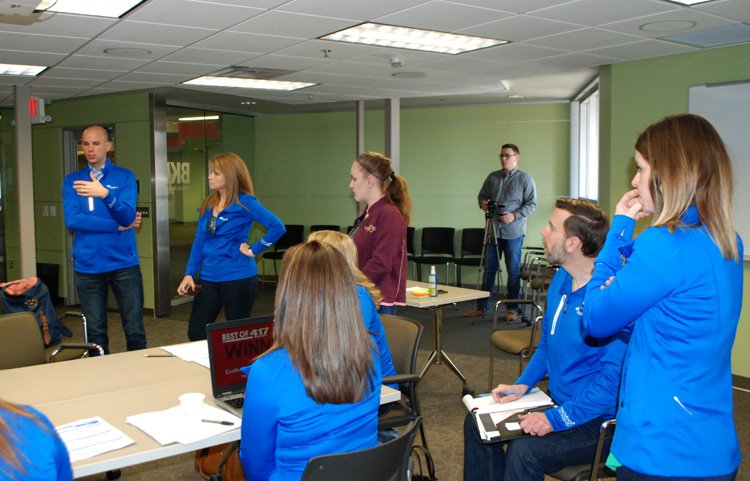 Rogers says the initial one-minute pitch is the part participants dread most. It is intimidating. It’s one thing to think up an idea, but it’s another to try to sell it with a timer running.

What strikes you as you spend an hour hearing 50 ideas is how many different ways CoxHealth professionals can express caring for our patients, our colleagues and our community.

The ideas vary, based on where a participant works or their individual background, but they all have the same core: Making things better for people who need help. That core is unique to health care. You see that caregivers aren’t always at the bedside. They are throughout our organization.

The pitches included several ways to support population health, prevent readmissions and use technology to support patient care. Some ideas had similar goals, and you could see plenty of heads nodding as participants heard their colleagues’ pitches.

With all the ideas on the table, participants were asked to cast three votes for the best projects.

Within a few minutes, the field was narrowed to a dozen projects. We then gathered and formed teams, standing with the person who pitched the idea we wanted to work on.

‘What did your doctor say?’

I joined nine other participants who lined up to work on a project pitched by Shelly Hillhouse of CoxHealth’s Performance Improvement department.

Shelly had a seemingly simple idea: What if we could record physician instructions for patients, so family members would know exactly what the doctor said? This would support patients and their families, improve communication and, if done correctly, reduce readmissions.

Everyone on the team had helped friends and family interpret instructions after a hospital discharge, so the idea resonated with us. We were excited to get to work. But before we left the room, multiple leaders raised questions about the legal implications and how we would get physician buy-in.

Some leaders later told us it was the one idea they were sure wouldn’t work. We had only a matter of hours to find a way.

With teams and projects chosen, we spent a social hour with our fellow participants in “The Perch” at The eFactory. By 6 p.m., we were back in our assigned room, sketching out our plan for the next day. We asked ourselves:

Are there other hospitals doing something similar?

What are the barriers we would have to clear?

How would we get physicians on board?

We began online research and reached out to other health systems that record discharge instructions. We sought advice from CoxHealth’s legal team and we started reaching out to physicians who could help us hone the idea. By 8 p.m., we headed home, ready to reconvene early the next morning. 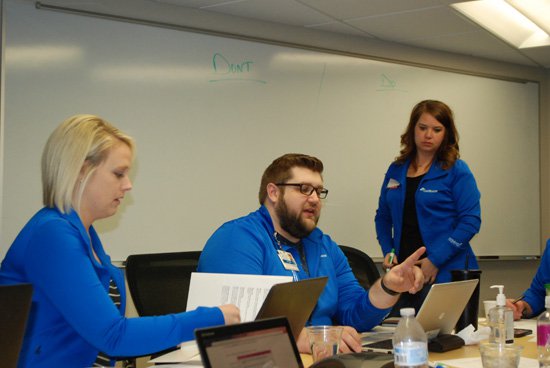 At 7 a.m. Wednesday, the teams regrouped to begin fully forming their ideas – ideas that would be presented in the first practice pitch sessions in just six hours.

We tracked down Dr. Frank Romero, one of several on-site coaches, to get his feedback. Suffice it to say he was not immediately thrilled with the idea of having his discharge instructions recorded. He raised some of the same concerns Legal had raised, about how we would keep the instructions consistent and how we would make patients aware that the instructions were subject to change if their conditions changed.

He did, however, see the value in providing instructions the whole family could see and hear.

Physicians spend a lot of time repeating information for family members. If that information could be delivered via video, how much time would it save? Dr. Romero thought, in some cases, having recorded instructions could cut the time spent on sharing information in half.

To address any concerns about having patient discussions recorded, we asked: What if we provided prerecorded, standardized video discharge instructions for a variety of conditions? Physicians could create the perfect set of instructions and make sure all their patients saw them. We could tag the standardized message with a short, personal greeting for the patient, recorded with an iPhone.

With that pivot, we went from an idea we would have to convince physicians to consider, to an idea that would save physicians time. Hello, buy-in. 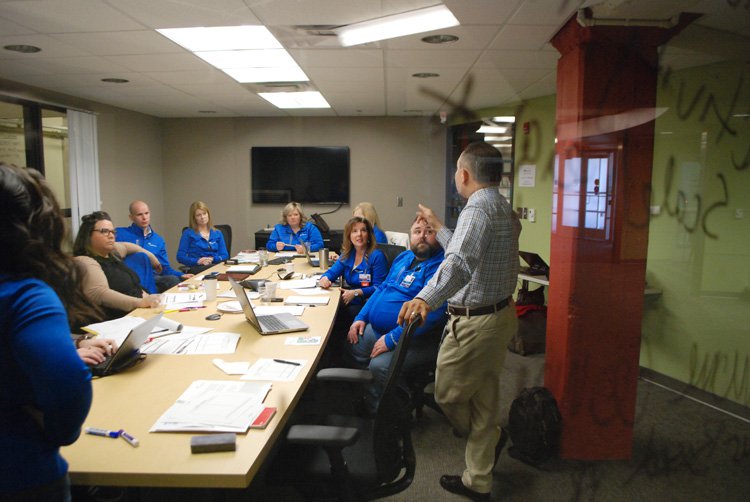 Over the next few hours, we worked to develop our new idea. On a team of 10, there is a lot of back-and-forth as we consider the questions. Should we deliver videos via an app? Where would the video files be housed? How long would they be available for viewing? What kind of budget will it take?

There were tons of valid ideas, but the accelerator’s time constraints forced us to be strategic. The deadline means you can’t get paralyzed by great options. You have a presentation in a few hours and you would rather not look like an idiot. This is a powerful motivator.

With 10 caffeinated minds devoted to a single problem, teams can get deep in the weeds. We were headed toward a comprehensive plan, but its success hinged on a short pitch.

Heather Swearengin of the CoxHealth Network offered a key piece of advice for presenting to the judges: “Don’t get into the sausage-making; just explain why this is the sausage you want.”

By 11 a.m., our group was divided between visionaries who were working to perfect ideas and taskmasters who were watching the clock and urging us to get our ideas structured into something presentable.

The final presentation is five minutes. That’s five times longer than the initial pitch, but still, not much time.

On a whiteboard, we had a framework:

· Describe how it affects stakeholders.

We had rehearsed an opening skit and outlines from three speakers. We even roped in a couple of physicians who made quick iPhone videos to champion our cause.

Our team was going first, so we found ourselves breaking the ice with the panel of judges. In five minutes, we made our case with seconds to spare. In a brief Q&A, we explained how we had considered the legal issues and how the idea had evolved.

And just like that, our hours of work were out for everyone to see. We breathed a collective sigh of relief.

Over the next hour, we watched the other teams share the results of their work. It was mind-bending to see how all of the ideas had evolved into plans that, in many cases, bore little resemblance to the original one-minute pitches.

Over the last day and a half, teams had consulted outside sources, worked with experts and coaches and created fully formed strategies to move CoxHealth forward.

Presentations ranged from technology, such as using advanced “blue light” to disinfect surfaces; to social responsibility, via expanding our recycling efforts; to compassionate care, including the creation of memory items for patients receiving comfort care.

The teams had spent the last day and a half focusing all of their energy on solutions that will make things better. 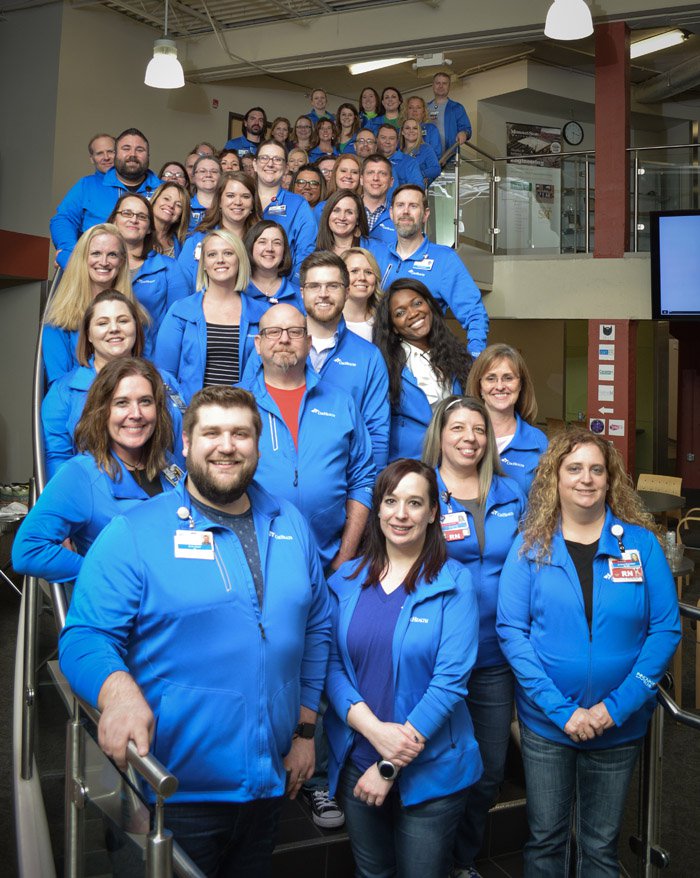 At 5 p.m., the judges stepped away to vote. As Scott predicted, there was plenty of joy in the crowd of participants milling about the eFactory lobby while the judges deliberated.

After a half hour of discussions, President and CEO Steve Edwards announced the top three projects:

Third place: “Back up care” – A backup option to provide sick child or elderly care.

Second place: “What Did Your Doctor Say?” – Not bad for an idea that seemed impossible one day before!

And first place: “Bots and the Future of Work” – A plan to use bots, software programs that run tasks, to automate repetitive computer tasks in Human Resources.

During the next few months, a few final projects will be brought to life and prepared for implementation. Others will undergo further review and consideration. The majority of the initial 50-plus ideas will be considered.

The days had been long and participants were tired, but there is something to be said for the effectiveness of focused effort inside the confines of the Innovation Accelerator.

In two days, seeds planted by individual ideas grew into the firm beginnings of projects that could change the way we work.

The accelerator speeds up the process, just as its name implies. It is also a reminder that these are the same hours and minutes we all have to work with every day. When you devote yourself to teamwork around a single goal, there is tremendous power in every minute and every hour.

Everyone had given their best, knowing they had a chance to shape the future for our colleagues, our patients and our organization.

It is a remarkably satisfying way to spend a workday.