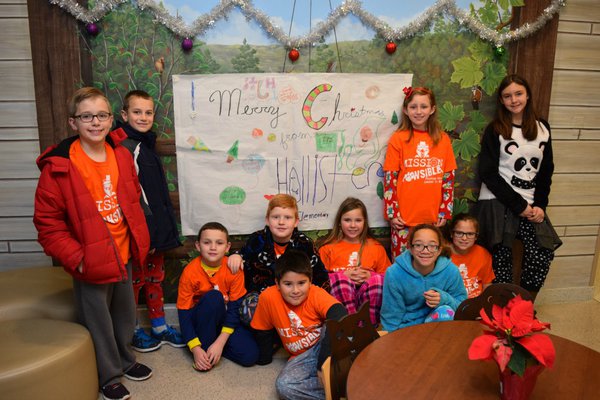 December is the season to deck the halls and spread holiday cheer, and some Hollister elementary students took such sentiments to heart.

“We want to help people in the community have a better Christmas,” says 9-year-old Amanda Burrow. “So we came up with this idea to help kids in the hospital because some kids have to be here over Christmas so we want to make it feel it’s Christmas here. Like they are at home.”

Classmate Benjamin Stevens agreed. “We wanted to make it more like Christmas so we wanted to be sure there were decorations for Christmas so that we can let kids have fun,” he says. “It makes me feel full of joy.”

The kids are members of an after-school service club, which in part is tied to a new emphasis at Hollister. “This is the first year that we are a ‘Leader in Me’ school and part of the goal is to make them a ‘whole person’ and help them become well-rounded citizens,“ says Amber Shuck, principal of Hollister Elementary School. According to its website, the “Leader in Me” program “teaches 21st century leadership and life skills to students and creates a culture of student empowerment based on the idea that every child can be a leader.”

Part of that leadership element is letting kids come up with their own service projects. “They brainstormed a lot of ideas and came up with the hospital is what they narrowed it down to,” says Shuck. “They wanted to do something here. We came back and forth with some ideas. They wanted to make someone happy for Christmas.”

After some deliberation, it was decided that decorating the emergency department would be a good option – and the students’ efforts haven’t gone unnoticed at Cox Branson.

“If every kid was taught in elementary school to give back to their community, what would this generation look like?” queries Lynne Yaggy, chief nursing officer and vice president of clinical services at Cox Branson. “This makes such a huge impact.”

But the patients and staff aren’t the only ones happy because of the project. “It makes me feel really good inside because we need to give a helping hand every once and a while,” says Burrow.