Half her size: Cox Branson employee inspires others with weight loss journey 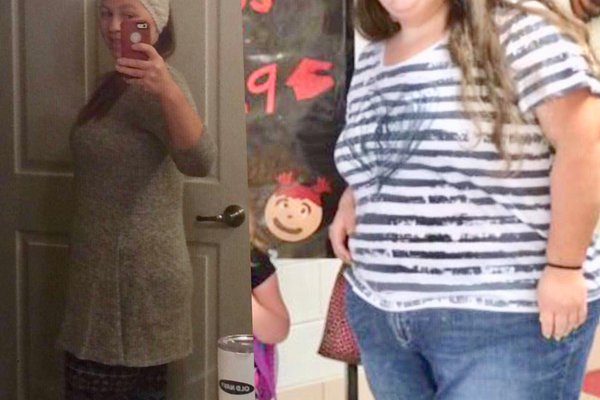 Sasha Comeaux, an employee at Cox Branson’s business office, stares and smiles as she flips through photos on her phone from a year ago. They depict a much different version of herself – one almost twice her size.

Sasha, who is down 170 pounds from those pictures, still can’t believe it’s her on the screen. “I guess I didn’t realize I was that big at the time,” she says while shaking her head at a photo. “I mean, I knew I was, but to see them now is shocking.”

And, it was shocking news that set her off on this weight loss journey in the first place.  She had battled back problems since her teenage years and a MRI revealed a year –and-a-half ago that she needed surgery to correct two bulging discs and a compressed disc. “Problem is, no one would work on me because I was almost 400 pounds,” she says. “They said I wouldn’t heal because the weight would just keep pressing on those discs. I was told I’d be in a wheelchair and paralyzed by the time I was 31 if I didn’t lose weight. At the time, that gave me six months to do something drastic.”

From shakes to pills, and other trendy weight loss fads, Sasha admits to trying many gimmicks over the years but vowed to take a smart approach this time. “I knew I had to do this the right way. I started eating more meat, vegetables, fruit and cut out soda. No complicated diet plan or program – just portion control with good foods.”

She started to see results, and that’s when her motivation really kicked in. “I just wanted to go, go, go! I suddenly had energy like never before,” she explains. “My house had never been cleaner!” Another important addition to her life was an exercise routine. She signed up for a membership at the CoxHealth fitness center at the Branson RecPlex, and worked out three days a week.

At the end of that first year, Sasha had shed a whopping 130 pounds.

“There were so many times I didn’t feel like going to the gym, but I knew I had to do it,” she says as she snacks on homemade sweet potato chips. “I had come so far and knew I just had to push through!”

Sasha is convinced that God put her at CoxHealth to save her life. “This place has provided so many resources for me to get healthier,” she says. “I’ve gotten the tools I need to make this change.” She uses payroll deduct for her fitness membership and says the Wellness portal helps her track everything from water intake to pounds lost. Not only that, but the labs required to secure the HRA funds found a big problem. “My healthy cholesterol was dangerously low,” she says. “I wouldn’t have known about that if I didn’t participate in the wellness program.”

Sasha has had many cheerleaders during this journey – from family to friends and even an app on her phone. “Every day at 5 o’clock, my fitness app alarm goes off. It tells me how much I’ve lost and gives me a motivational message,” she explains. “I timed it to go off during dinner to remind myself that ‘I got this.’ My daughter laughs when it goes off now. She says, ‘We get it! I have a skinny mom now!”

However, that new “skinny mom” has some old insecurities that surface from time to time. “What if I mess this up? What happens when the goal is reached? It scares me,” she says. “I’ll be honest; I have some anxiety about how I will maintain this weight once I get there. I’ll just have to keep trusting myself and sticking to it, I guess.”

Sasha admits there have been a few detours along the road to her goal of losing 200 pounds – including some snafus with cheat days. She used to allow herself a cheat day every Saturday but found it was derailing her progress. “I’d gain five pounds each weekend, then spend the next week losing it. Before I knew it, Saturday would be around again. I realized it was a roller coaster that wasn’t worth it.

And, speaking of roller coasters: Sasha hit another big milestone this past Christmas – one she almost tears up talking about. “I hadn’t been able to fit on a ride at Silver Dollar City since I was 13 years old. I took my kids for the first time this Christmas and we rode Fire in the Hole together. I realized I had made it when I fit behind the bar! It was thrilling!”

Those small successes are adding up to big successes on Sasha’s incredible weight loss journey. Remember that back surgery she so desperately needed? When the weight dropped, she no longer needed to go under the knife. “It’s crazy! I’m not even in pain anymore,” she says. “I’m 31 now – the exact age doctors told me I’d be paralyzed if I didn’t do something. This is all so crazy to think about, but I did it. I made it. I hit it hard and hit it fast – I’m more happy and healthier than ever.”