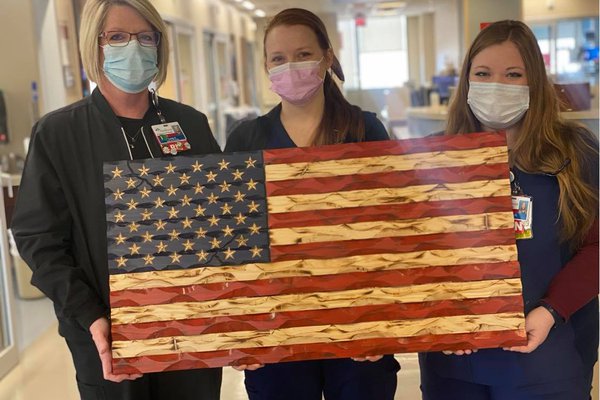 A patriotic masterpiece is catching the eyes and hearts of staff and visitors at Cox Branson – a giant wooden flag crafted by a teenager in Florida as a way to honor health care heroes.

Lorenzo Liberti’s “Heroic Flags” project actually began a few years ago when he was 14 years old as a way to honor military veterans.

“I was volunteering at a soup kitchen and served a homeless veteran,” he recalls. “It opened my eyes to a world I didn’t know existed. How could a hero like that be homeless? I knew I needed to help.”

The summer after he graduated middle school, he began looking for DYI projects on YouTube to stay busy. He came across a wooden flag making project. His father bought the materials and, after a few tries, Lorenzo created a version that satisfied him. 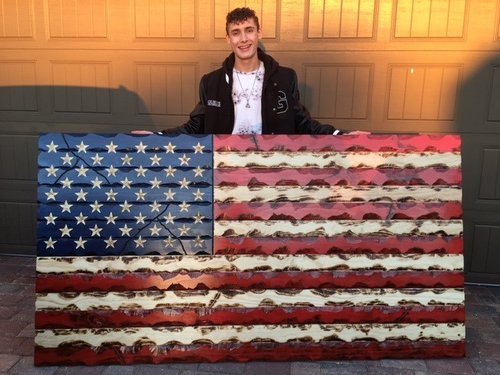 “That’s when it hit me that I could sell the flags and use the proceeds to help homeless vets. I discovered the Yellow Ribbon program at Turning Points, and they fell in love with my flags!”

Turning Points auctioned off two of the flags at its Christmas auction that year, raising more than $2,300 to help veterans.

“It was the most amazing night of my life,” Lorenzo recalls. “I knew at 14 years old that I had found my way to help these heroes.”

In early 2020 when the COVID-19 pandemic crippled the world, a new kind of hero emerged for Lorenzo to help.

“These heroes wore scrubs and face masks instead of camouflage and guns,” he says. “Our frontline health care workers mustered up the courage every day to go and fight an invisible enemy. I felt helpless to honor them, but that’s when I realized my flag project could help frontline fighters and veterans at the same time.”

Lorenzo started a GoFundMe page to honor health care workers by sending a Heroic Flag to one hospital in every state and donate the proceeds back to Turning Points to support the Yellow Ribbon Program for veterans.

Lorenzo chose Cox Medical Center Branson to represent Missouri. The beautiful flag was a surprise to hospital staff when it arrived last week from Florida. 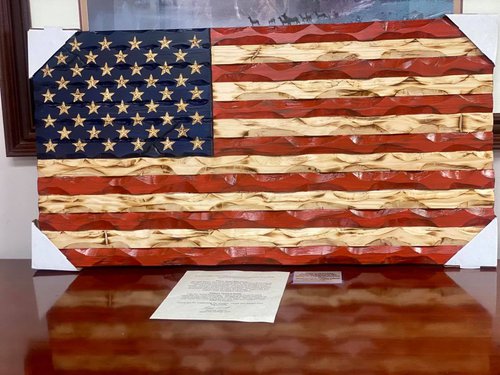 “We are so honored to be the recipient for the state of Missouri of this amazing, generous and unexpected gift from an incredible young man,” says Lynne Yaggy, chief nursing officer and VP of Clinical Services at Cox Branson. “Branson is known for honoring veterans year around, and we are blessed to add this work of art to our community.”

Cox Branson President William Mahoney calls the flag an incredible symbol of what the country has been through during the pandemic.

Find out more about Lorenzo’s project at www.heroicflags.com