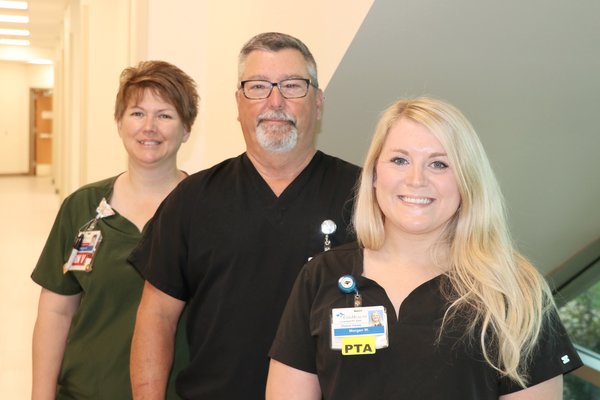 In 2011, Cox Monett began a cultural transformation process of moving the hospital from good to great. Many of the guiding principles the hospital followed then, and still to this day, are by Quint Studer, best-selling author and founder of The Studer Community Institute. He says, "Culture outperforms strategy every time, and culture with strategy is unbeatable."

The hospital's transformation process included selecting the right staff for the right positions. When Cox Monett found itself looking for its next hospital President in early 2022, staff members were included in the selection process. Involving staff in decision-making is not a new concept to Cox Monett. When the new facility was set to be built, hospital leaders included staff in the design meetings for their departments.

"When I first heard about staff being asked to assist in the selection process of our next President, I thought it was a great idea," said Morgan Wooldridge, physical therapy assistant at Cox Rehab and Sports Medicine. "I was honored to be selected and to be involved with such an important process that would directly affect myself and my co-workers for many years to come."

"After the standard questions, I had an opportunity to ask each candidate about the things they hoped to accomplish within the first few months of being on the job," said Pat Blamey, director of Radiology at Cox Monett. "Throughout the process, I was looking at how their values aligned with ours, excellent communication skills, and a match for our organization's culture."

Beyond staff members, there were several other teams organized to interview the final candidates. Physicians, hospital leaders from Cox Monett and Cox Springfield, and Community Advisory Board members participated in the interview sessions.

"I feel including staff in the selection process gives us a real voice in the hospital, which we all take pride in," says Sabrina Gralheer, RN, Ambulatory Procedure Center. "When you ask our opinion, we feel more invested in the hospital as a whole."

Virtual interviews were held before narrowing down the final two candidates who came for an in-person visit in March to the hospital. The candidates also met with realtors and received a tour of the beautiful Monett community.

"The interview process was very interesting and it made me realize the candidates are just 'real' people and approachable," says Gralheer. "I was able to better picture them in my mind as our next leader."

Cox Monett continues to be a top-performing hospital for patient experience, and a few years ago, reached the No. 15 spot on Modern Healthcare's list of Best Places to Work in Healthcare. The hospital has set its sights on being one of the best rural hospitals in the nation.

"I appreciate that Cox Monett cares about including staff at all levels of the organization in decisions that are made," says Wooldridge. "This is what sets our hospital apart from others, and what is going to take us to that next level."