Posted by Kaitlyn McConnell on April 9, 2021 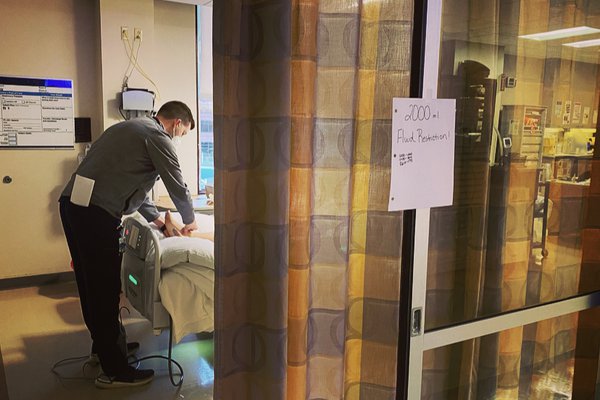 We recently shared behind-the-scenes peeks at a day in the life of a resident physician, and their role for patients at CoxHealth. The day focused on Dr. Grant Ralston, and was broken into nine separate moments, which may be read below.

1/9: The day is dark when Dr. Grant Ralston arrives at Cox South to visit patients in the hospital. He’s in his first year at the Cox Family Medicine Residency, and represents one of hundreds of physicians who have come through the program since its inception in 1987.

The three-year program draws physicians from all across the country, after graduating from medical school, and gives them the opportunity to train in specific areas – and offer their care and compassion – as they serve patients in both clinic and hospital settings. Dozens of physicians have remained in Springfield and at CoxHealth who have graduated from the program, staying to offer their skill to the Ozarks.

2/9: When Dr. Ralston arrives at Cox South around 5:45 a.m., he heads up to the residency’s work space on the ninth floor, and begins reading updates about patients in his care.

The dark begins to turn to day, evident through a wall made of windows, as he reads, types and speaks, and prepares to visit a list of patients throughout the hospital in different areas. “I see a list of all patients, and things including their vitals from overnight, and what I need to do, so we have a plan for that day,” says Dr. Ralston.

After he’s done reading, he prepares to head out into the hospital to visit each one.

Such a start is typical but never normal, as each day evolves differently based on each life he serves.

3/9: After reading all of his updates, Dr. Ralston heads out to round on patients in the hospital. On this day, he has eight inpatients, with the first being on the eighth floor. He knocks softly as he enters the room to speak with the first one who has plans to discharge that day. After the first, others follow: A woman who is pregnant with complications. Individuals in CVICU. Another in the Clinical Decision Unit with an issue still to be solved. Discussions vary, but focus on more than just medical care:

“And you were able to get someone to take care of your cat?”
“I think that’s the safest decision for you.”
“Is it worse when you’re laying like this?”
“We’ll keep you on the fluids so you and your baby stay safe.”
“It’s something we’ll keep a close eye on.”
“Are you feeling a little bit better now?”
“Is there anything else I can do for you?”
“Have a good day.”

He quietly leaves, grabs hand sanitizer, and heads to the next one.

4/9: Heading from floor to floor, Dr. Ralston shares about why he wanted to join the Cox Family Medicine Residency. One main reason: The friendliness and welcoming nature of others in the program.

Another factor is that residents in this program get to serve in so many different areas: Dermatology, Family Medicine, Gynecology, Human Behavior, Obstetrics, Pediatrics, Sports Medicine, Surgery, Rural Medicine and more. This allows them to hone their skill in many areas, all while working with physicians who specialize in those specific focuses.

“It’s really attractive to a lot of people,” he says of the program, speaking of work as wide-ranging as delivering babies to suturing wounds in the Emergency Department. “Just being able to do a little bit of everything.”

Background: Today we’re sharing behind-the-scenes peeks at a day in the life of a Cox Family Medicine Residency physician, and their role for patients at CoxHealth. Watch for updates as we follow Dr. Ralston during his day.

5/9: After finishing with rounds, Dr. Ralston heads back up to the Residency’s hospital workspace to check in with Dr. Theo Zemanuel, who is a third-year resident and nearly finished with the program. The two sit and discuss the courses of care for the patients Dr. Ralston visited earlier in the morning.

The residency lasts three years, and begins after physicians graduate from medical school. All work closely with attending physicians – doctors who are practicing – to ensure that all care given is the best course for the patient.

6/9: Much about Dr. Ralston’s life was decided when he was in junior high. That was when he first asked out his future wife – which led to time spent working with her father, who was a physician. That summer was enough to convince Dr. Ralston that a similar path was right for him.

“I loved the way his patients interacted with him, and it was so cool to see how he was involved in so many details of their lives,” he says. “Pretty much there, I was hooked.”

Beyond medical school, the Cox Family Medicine Residency seemed right for a number of reasons. He’s from Wichita, but family connections familiarized him with Springfield. His grandmother attended today’s Missouri State University, and a cousin worked at CoxHealth. “She always had glowing remarks about the health system, and Steve Edwards,” he says. Such elements laid the groundwork for his decision to interview with the program – and, after interviewing at a lot of places, that made the difference in his decision for Cox. He spoke of the kindness and genuine spirit of those connected with the program; as a Christian, it meant a great deal to him that program leaders actually prayed for him. “I could tell it wasn’t fake,” he says. “Once I interviewed, I knew this was where I needed to be.”

7/9: Part of becoming a physician is sharing in life’s joys and sorrows. One of those moments hit during this day, when he learned that a patient had passed away. The individual had cancer and was hospitalized, but a rapid change in condition overnight was unexpected.

The surprise and sadness was heard from one side of the phone as he received updates in the early morning hours. Later, walking the halls, he spoke with a nurse who cared for the patient; he also reviewed the patient’s case with other physicians.

“Every physician has patients who pass away, and it’s something that will never be easy,” he says, and thinks of the individual, but on this day works to move forward to care for others.

“It’s probably when I get home I’ll think about it a lot more.”

Similar to hospital rounds, working in the clinic allows residents to serve individuals in a wide range of life moments. Some are for immediate needs, while others include the management of chronic conditions. Today, he has eight to see over the course of several hours. Between patients, he stands at a centralized station to document these visits and courses of care, and can consult with other physicians when necessary.

The resident physicians traditionally serve patients at this clinic. An expansion to the program is in progress, and starting with the class of 2024, two physicians will be based full-time at Jordan Valley Community Health Center. The physicians who serve patients at Jordan Valley will be funded by a grant from the Health Resources and Services Administration (HRSA), which was secured by the CoxHealth Foundation, and CoxHealth faculty will support their work.

9/9: When Dr. Ralston finishes in 2023, he will become one of hundreds of physicians who have completed the residency program. A former track athlete, even competing on the collegiate level, he hopes to pursue a Sports Medicine fellowship. And while plans are undecided after that point, we may see more of him in the future.

“I’d definitely be interested in coming back to CoxHealth.”

We hope so, and he’d be in good company: Of 209 certified by the American Board of Family Medicine, 67 currently work at CoxHealth, 67 in Springfield, and 158 in Missouri.