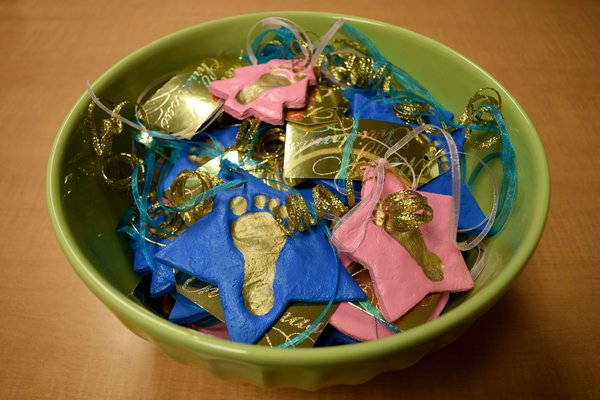 It may only be a mixture of flour, water and salt, but to some CoxHealth parents, it’s an irreplaceable memory.

For three years, staff members in CoxHealth’s Neonatal Intensive Care Unit have volunteered – on their own time – to create Christmas tree ornaments featuring the babies’ footprints. The ornaments are given to parents as a keepsake of their baby’s first Christmas.

“It’s never fun for families to be in the hospital, but it’s especially difficult during the holidays,” says Kathi Long, a physical therapist at CoxHealth who has been involved in the project since it began. “We want to do something that makes this time a little more bearable. And if something as simple as making Christmas ornaments can put a smile on parents’ faces, then that’s what we want to do.”

The process begins early. On Dec. 22, Long gathered at 7 a.m. with nurses Sarah Bethurem, Lara Ellis and Allison Rowley to create the dough for the ornaments. After mixing and rolling it out, the staff members go room to room, spread plastic wrap on the dough to protect the babies’ feet, and create an imprint – one that touches more than just the dough.

“These are the types of crafts and projects that many of our parents wish that they were able to do with their baby at home,” says Long. “We want to help these families create special, good memories even though they’re going through stressful situations.”

After the imprints are made, the dough is cut into shapes such as circles, stars and Christmas trees, and is baked for several hours. Then each ornament is painted blue or pink, and gold paint is used to highlight each baby’s footprint. Tags are attached, noting that the ornament is a gift – one from the baby to his or her parents. The final step in the process is delivery: The group brings the parents their baby’s ornament. “That their baby could ‘give’ them a gift is something that especially touches some of our parents,” says Long.

But really, the parents aren’t the only ones getting a gift. “It feel unbelievable to help make something like this happen at the hospital,” says Long. “What we get back is far more rewarding than anything we’ve done.”