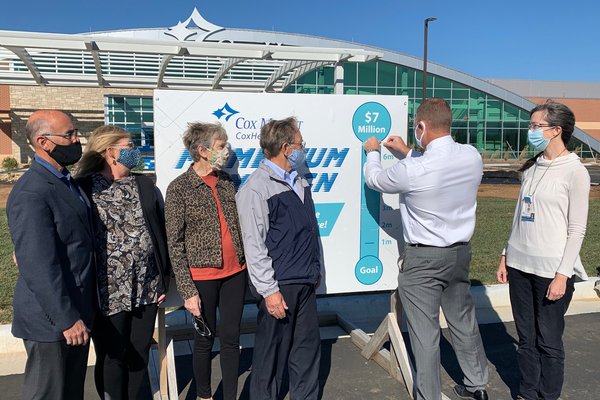 The CoxHealth Foundation announced today that it has surpassed the $7 million capital campaign goal to fund construction of the new Cox Monett Hospital. It’s part of a $42 million project to replace the current facility that was built in 1953.

“It has been a pleasure to assist with the Cox Monett Momentum Campaign,” said Mike Garrett, co-chairperson of the fundraising campaign and former president of the Cox Monett Community Advisory Board. “The success of this campaign is a tribute to the energy of our volunteers and the generosity of the individuals and businesses we contacted. The new hospital is an impressive and exciting addition to our community.”

To date, the capital campaign has raised $7,026,096.64 for the critical access hospital that will feature state-of-the-art equipment, including an in-house MRI, 64-slice CT scanner, and 3D mammography.

“Fundraising is always a challenge, and this year with COVID-19, even more so,” said Lisa Alexander, president of the CoxHealth Foundation. “I can’t express enough my gratitude for our Campaign Committee whose dedication to this mission, partnered with the incredible group of over 200 individuals and businesses who gave, is the reason this goal has been met.”