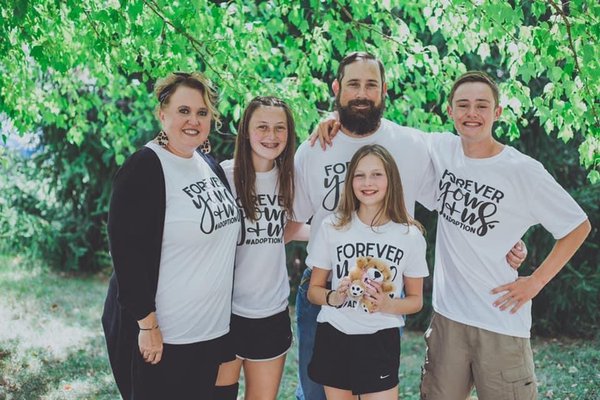 Director of Nursing Adene Smith has an added sparkle in her eye as she straightens the family photo hanging in her office at Cox Branson. There’s an extra Smith smiling down from the frame – a little girl with a familiar, crooked grin who found a new family in an unexpected place, at the perfect time.

It’s a story that rivals the greatest Hollywood script and, after months of waiting for the right time to tell it, the Smiths can finally share. 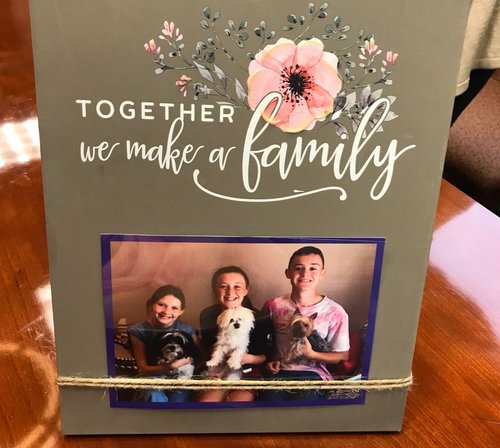 Today, there is a crowd of hospital employees wearing “Happy Gotcha Day” t-shirts  outside the Christian County courthouse in Ozark where Adene and her husband Eric officially became the proud, adoptive parents of 11-year old Taliah – a moment many months in the making.

“Our story actually began several years ago, but we just didn’t know it,” Adene explains. “I helped care for an elderly couple at the hospital through the years. During my rounding, I noticed they always had a little girl with them. She was so sweet and had the same little crooked tooth as my own daughter Gracie.” 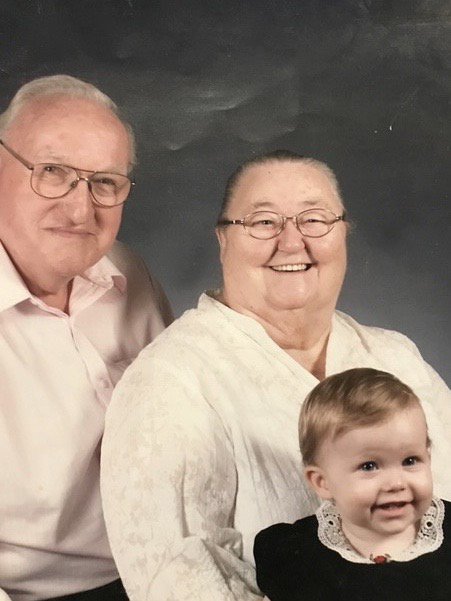 Adene learned that Ray and Clara, who were both in their late 80s, had adopted Taliah as an infant. They were her great-grandparents, but the child knew them simply as Mom and Dad.

About two years after Adene first met the family, Taliah’s parents were back in the hospital with declining health.

The couple’s extended family loved Taliah so much they wanted her to have the best possible chance at life.  They expressed to the social worker that if they were to take Taliah, she would find herself in the same situation with older family who would likely be too old to keep up with an 11 year old.  At that time, they were even considering foster care as an option.

During a case conference where social workers and nurses discuss all patients, this case was mentioned. Adene was in the room and remembered this family.  The thought that the little girl was about to lose her parents and her future was undecided was too much for Adene’s heart to take.

“I have two children of my own, but I couldn’t bear the thought of that little girl going into foster care,” Adene says. “I went home and told my husband we needed to adopt her.  He was understandably a bit shocked but got on board and offered his support as we began how to explore the process.”

That process was a long one with piles of paperwork and multiple steps, including getting Taliah’s parents to support her adoption.

“That was a really heartbreaking reality for them,” Adene recalls. “They knew it was best for her but I’ll always remember what Ray told me: ‘I know she’s ready to move out, but I’m afraid she’ll forget me.’ That tore my heart out. I promised moving forward that we’d do everything in our power to make sure Taliah still saw her folks.” 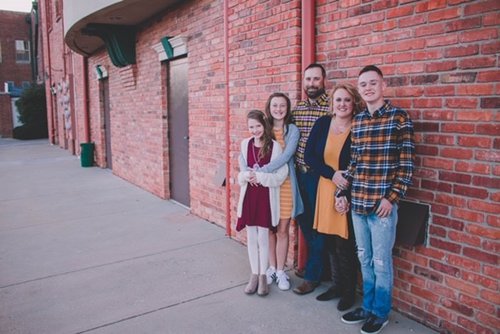 After being granted legal guardianship and getting the blessing from Taliah’s family, the Smiths moved her into their home in October with a sack of clothes and a few of her favorite things: A lava lamp and two gerbils named Cookies and Cream.

While the Smiths couldn’t officially petition for adoption until Taliah lived with them for six months, the first half-year was filled with all sorts of firsts for Taliah: An official birthday party, learning to bowl, shopping for school clothes and taking acting lessons.

“There’s just almost too many fun firsts to even mention,” Adene says with a laugh. “She’s learned to swim, slept in her own room, had a big Christmas with lots of family and goodies. She’s gone on a boat, swam in the lake, had sleepovers, went to White Water and danced like it’s nobody’s business.” 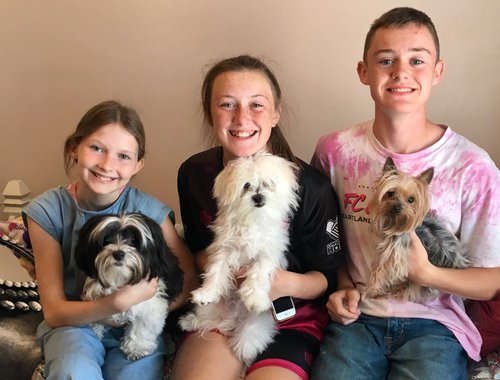 Adene says it’s joyful watching Taliah just being a kid because she’s had to grow up fast as the daughter of elderly parents.

“Before she moved in with us, she spent most the time being a caregiver and worrying about her mom and dad. Now, she can just focus on school, playing and having fun.” 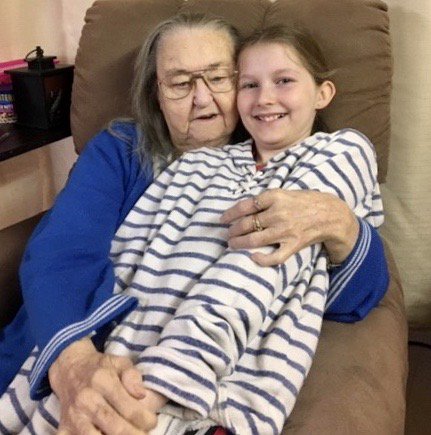 Taliah’s parents were moved into nursing homes not far from where the Smiths lived. Adene kept her promise to them to visit often.

“We made sure to get up whenever we could,” Adene says. “I owed that to all of them.Taliah loved decorating their rooms and surprising them with snacks. They perked up every time they saw her.” 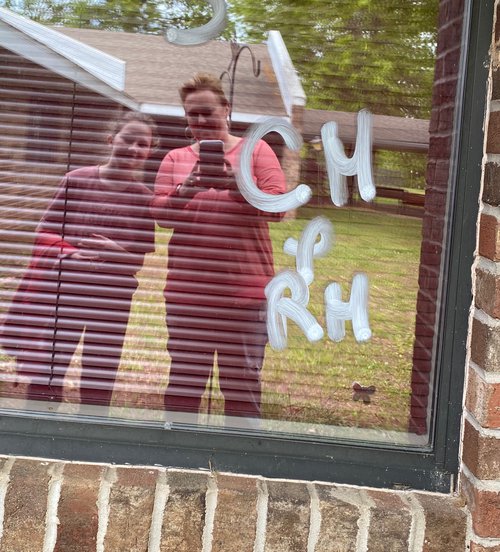 Once the pandemic hit, those visits were often through the window. “That was really hard on all of us. We knew they desperately wanted to see their daughter. Even though the staff at the nursing home helped set up a few virtual visits, it’s just not the same as being there in the room with them.”

Taliah’s first year with the Smiths brought plenty of joy but also hosted heartbreak. Her mother Clara passed away in May. Adene calls that loss especially tough since Taliah was unable to say goodbye due to COVID restrictions.

“She had a lot of questions as she grieved,” Adene says. “She wanted to know if her mom was alone, if she was in pain and if she is an angel now. We assured her that she was definitely an angel and will always watch over all of us.”

With the help of her CoxHealth family, Adene pulled together a memorial service in her backyard– a celebration Taliah planned herself. She wanted her mom’s favorite hymns performed, so Adene invited her co-worker Cheryl Gabriel and her husband Doug – both Branson entertainers – to sing at the gathering. Taliah also coordinated a balloon release, writing a special message to her mom on her balloon – things she wish she could have told her before she passed.

“That gave her a sense of closure that she really needed,” Adene explains. “It’s hard to lose a parent at any age, but especially for a young child who is already dealing with so much change. I’m so thankful she had us to help get through it.” 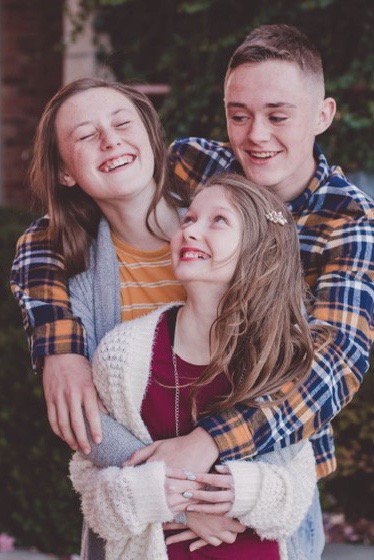 Part of that support team are two siblings – big sister Gracie and big brother Matthew --who have been an added bonus to Taliah who was raised an only child. Adene admits suddenly becoming a family of five has had a few challenges for their new daughter.

“Siblings bicker and she wasn’t used to that or how to handle snarky comments from a brother and sister,” Adene says. “She’s learning how to deal with that and finding her place. Adopting a child isn’t something to take lightly and we’ve been in family counseling since she came to live with us to make sure everyone’s feelings are shared. Counseling really helps the kids understand each other.” 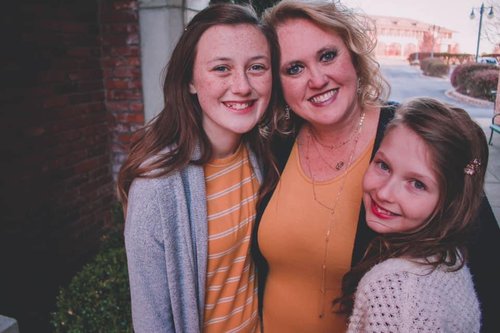 Adene’s work family continues to consider Taliah part of their family, too. Nurse Susie Reese has a mom who loves to sew, so she collaborated on a special gift to give Taliah as a way to honor her mother – a handmade quilt crafted from her favorite shirts. 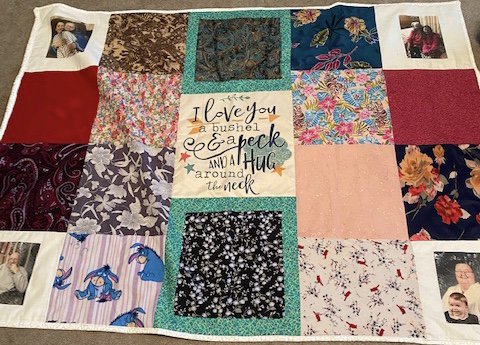 “That quilt meant the world to Taliah,” Adene says as her eyes well up with tears. “I watched as Taliah gently touched each and every square, remembering when her mother wore each shirt. The center square had a quote that she always told Taliah: ‘I love you a bushel and a peck with a hug around the neck.’”

There are other sentimental reminders of Taliah’s mom throughout her new home with the Smiths, including her mother’s rose bush, which was replanted outside her bedroom window. 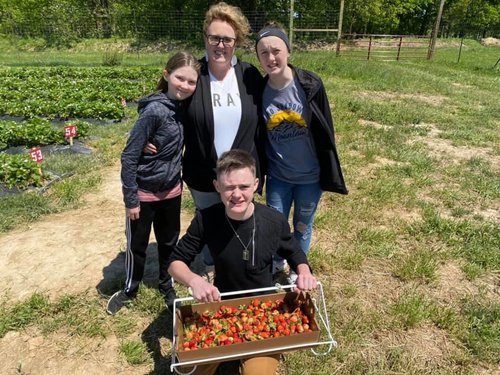 Experiencing that grief with Taliah made the Smiths even closer. Now they’re excited to witness more of life’s adventures through her eyes. “There are still so many firsts for her to share. She’s never been on vacation, so we’re excited to pack up and head out as a family. Little things like that are big things to her and we can’t wait to keep this adventure going. Our hope for all three of our children is for them to grow up into kind, compassionate adults who always look for others to help. Taliah’s always been a helper – she had to be. She’s a perfect Smith.” 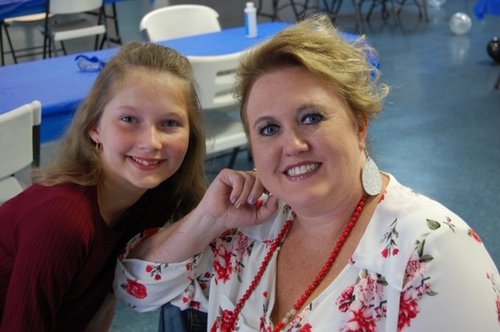 As the sun sets over the Smiths’ home each night, Adene enjoys an extra little chore. She tiptoes down the hall to tuck in Taliah, who’s already fast asleep.  As the door cracks open, light from the hallway shines on the face of the little girl with the familiar grin – Adene’s beautiful bonus baby. “I just can’t stop looking at her,” she says with her hand over her heart. “It’s like our story was already written—maybe she really was destined to be ours all along.” 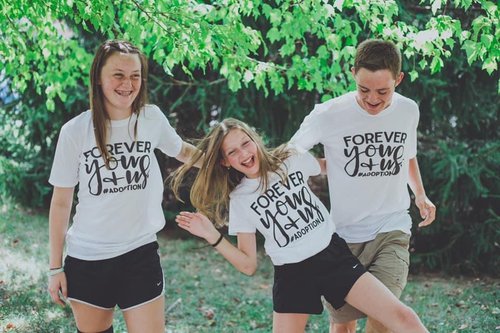 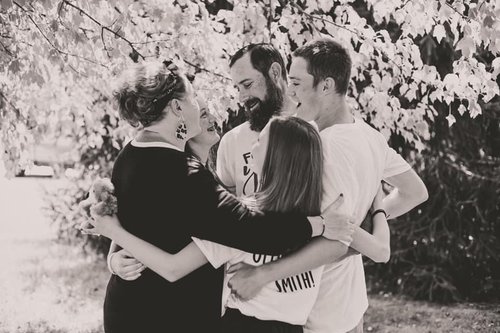 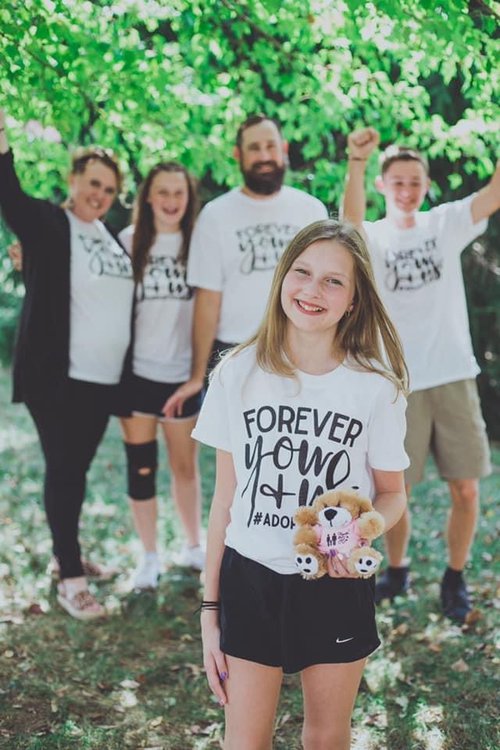 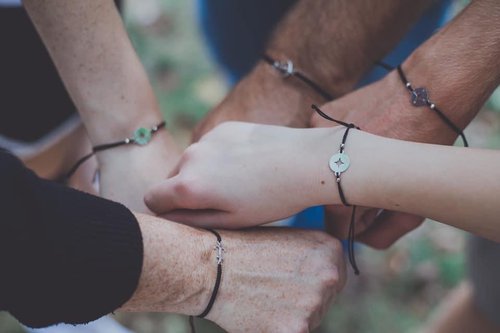 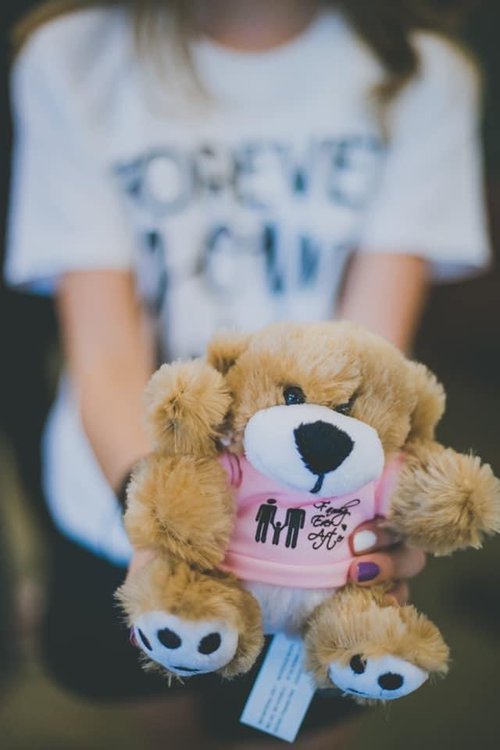 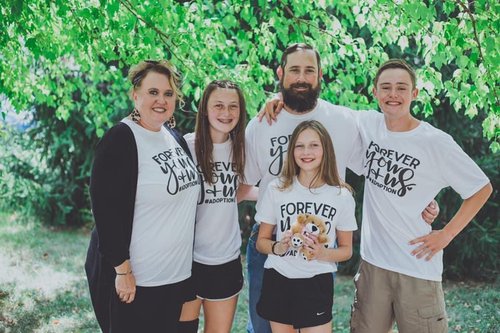 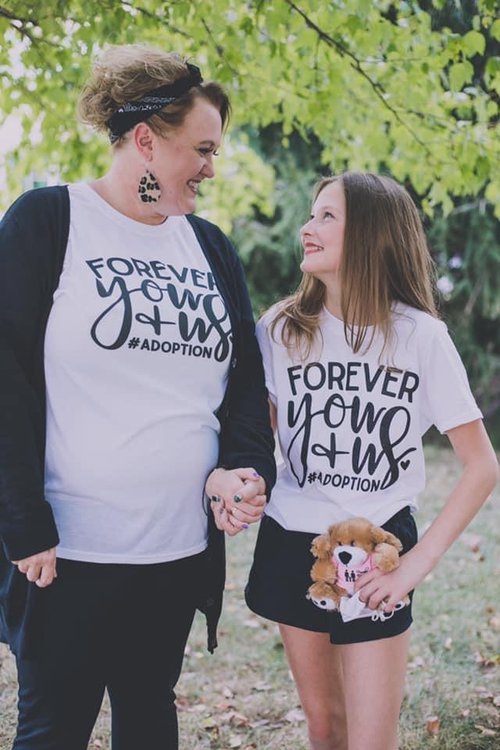 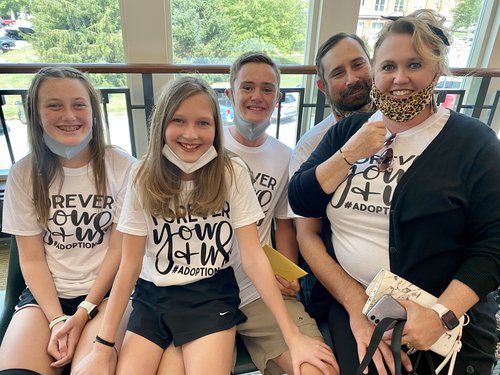 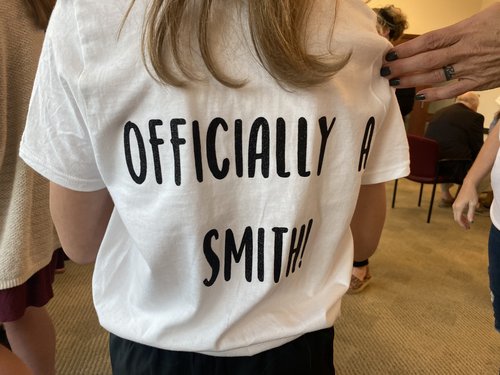