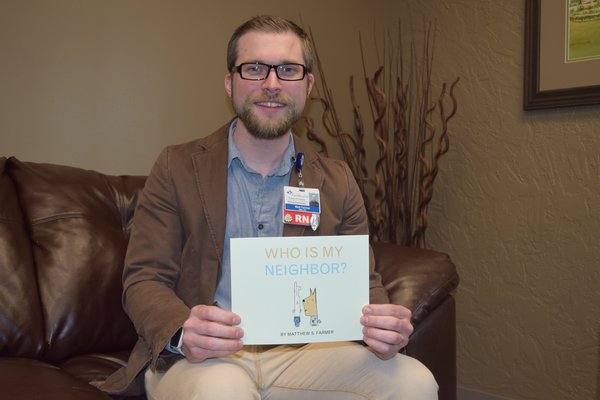 Matt Farmer has never been much of a doodler, but when his father died a few years ago, he was inspired to pick up a paintbrush as an outlet for his grief.

Farmer, the director of Critical Care and Emergency Services at Cox Branson, found himself immersed in his new hobby but had no idea it would transform him into a published author.

“I remember watching Bob Ross a week after my Dad’s death which is close to my birthday,” Farmer says. “It was so peaceful. I told my wife that I wanted to celebrate my birthday that year painting along with the show.”

He was hooked. Just six months after learning how to paint, Farmer hosted an art show – even selling some of his work.

Fast forward to last summer when the novice painter had a new artful plan – trying his hand at writing and illustrating a children’s book. It was an idea that came about as he read the Bible to his 3-year-old daughter, Quest.

“Jesus’ parables are such great stories, but they can be hard to explain to kids,” he says. “I thought how cool it would be for them to be retold with cartoon characters.”

Farmer put pen to paper and worked diligently – and quickly – to make his children’s book dream come to life.  The first parable he would tackle was the Good Samaritan story. It’s a tale of a person getting robbed of all of his things and learning that the people who should help him don’t, and the person who shouldn’t help him does.

Farmer wanted to break down the lesson in a way kids could understand, so he developed a memorable rhyme structure. Then, it was time to put his newfound art skills to use as he began to develop and illustrate the characters. First up was Ronnie Rabbit.

“I hated probably the first 100 that I drew, but I kept going and kept editing,” he says. “I had piles of paper before I finally got one I was good with.”

The blocky, simple-style characters have bright colors and expressive faces. What would kids think? Farmer went to his favorite critic. “Quest said ‘That’s a rabbit!’ so I knew I was on the right path,” he says with a smile.

After putting the words with the drawings, Farmer had his book “Who is My Neighbor?” printed at the College of the Ozarks printing press. Just five months after having the idea to write a children’s book, he was holding a finished copy in his hands.

He smiles at the thought of parents reading his book to their children.

“I hope parents will use this story to shine a light on Jesus’ teachings,” he says. “The thought of children enjoying my book – that’s everything.”

He recently got to witness that joy first-hand. He was on a plane heading back from a work conference when a small child in the seat behind him was getting restless. He reached in his backpack and offered the girl and her mother a copy of “Who is My Neighbor?”

“I heard them reading the book out loud and it was the most beautiful moment,” he gushes. “Later, the mother turned to me and said her daughter wanted my daughter to have a little toy just like the wolf gave the rabbit his toys in the book. That showed she really understood the lesson in the book. There’s nothing more powerful than that.”

Farmer hopes to create an entire series of parables for children. His second book, “The Hidden Treasure” will be published May 6, 2019.

He hopes to complete two books each year. And, while they are dedicated to Quest, he says his late father continues to be a big motivator.

“It’s through things like art that I can continue to give back and grieve as I move forward,” he says. “It’s been a really positive way to pour into my daughter and at the same time help myself by getting that energy out. I always encourage others to do the same – even those who say they can’t even draw a stick figure. I just tell them to get the pen moving. Once you can express yourself and get your thoughts out of your mind and into some kind of content, you can move it away from you. Get the things that were stuck on the inside on the outside. That’s such a good therapy.”

You can purchase Farmer’s books on his website www.matthewsfarmer.com or order them on Amazon.