Cox Branson adds tribute to late veteran: 'We know he's watching over us' 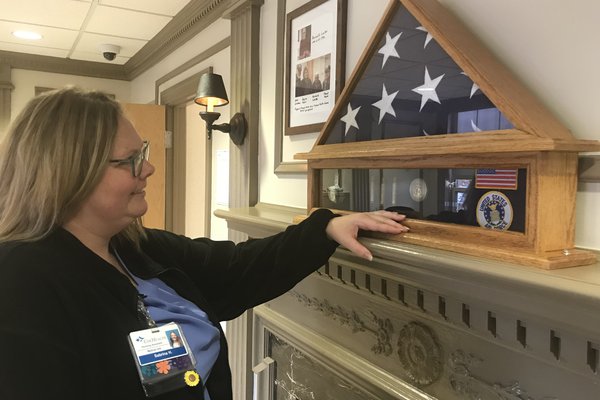 Inside a shadow box, treasures honor late U.S. Air Force veteran Ken Lester who spent four months at the medical center. The case holds his memorial flag, war medals, bullet casings, and the only possession he had: a gold watch.

“It’s like Mr. Lester is watching over us and making sure we’re doing our jobs – just like he did when he was here,” says Hurtgen as she looks at a framed photo of Lester which hangs near the case. “The watch is still ticking along like he's still here. That's so special."

Lester was 82 years old when he came to Cox Branson after a fall last year. He spent almost four months at the medical center and had no family. Staff became his support system, who stepped up to make sure he knew he was loved.

“We became his family and he became ours,” says Janine Johns-Shaffer, social work manager at Cox Branson. “He served so bravely in the military, so we were honored to pay it forward and serve him with everything we had.”

When Lester was ready to be discharged, hospital staff worked feverishly to find him a home. After countless phone calls, meetings and piles of paperwork,  they were able to connect him to a foster family through the VA Medical Foster Home Program.

“One of the sweetest days was when his new family came to get him,” says Johns-Shaffer. “He was excited to meet them and was hopeful his new mom knew how to make fried chicken! That was a really great day.”

Hospital staff hangs on to the happy memories of that day as they reflect on Lester’s death a month after he left. They continued to advocate for him after his passing, making sure he received a burial with full military honors.

“That’s what he deserved,” says Adene Smith, director of nursing at Cox Branson. “We find peace knowing we gave it our all to make sure he was honored with pride and dignity. We owed that to him.”

This week, Lester’s foster family returned to the medical center for a small ceremony in the lobby where the shadow box was presented to staff.

“He loved this place and he loved these people,” says Joyce Keim, Lester’s foster caregiver. “These items were all he had. And, they are right where they should be – at the hospital with his family.”