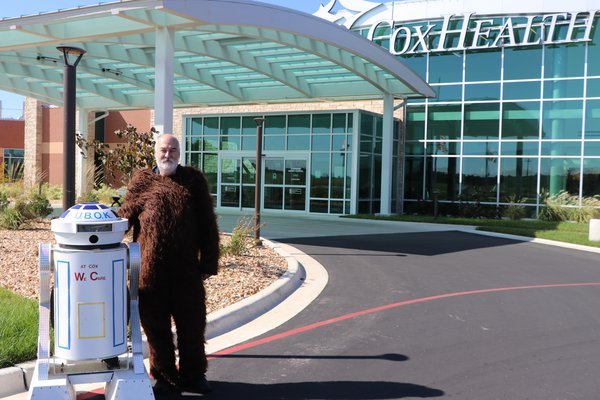 Most people know James Vroman at Cox Monett as “Chewy,” but have you ever wondered where his nickname came from?

Before we dive into the question everyone would like to know, let’s take a look at this iconic figure who is very well-known in our corner of southwest Missouri.

Vroman, a bio-med technician with training in electronics, started his career with CoxHealth in 2001. Over the years his position has changed, but one thing remains the same, he can fix anything and everything, possibly with parts he has saved or repurposed.

“I like to consider myself a jack of all trades,” he said. “To make a living fixing things was a great career choice.”

Vroman landed his first job out of college with Rockwell International Defense Communications in Richardson, Texas. There, he learned how to do sheet metal bending, run mills and other equipment in the machine shop, plus work with electronics here and there. One project he worked on was to build a wood mockup of a trailing wire antenna system and have it copper coated so he could do an arc over test, which is a common industry standard. His various duties also included taking care of the computers for the Hardware Engineering Department.

After leaving Rockwell, Vroman worked in the computer industry and decided to take a locksmith course because he ‘likes to learn new things.’

Vroman eventually moved back to Missouri when his father passed away. His mother worked in the hospital’s business office for many years and told him about an opening in the Engineering Department.

This is where we get to the part in the story that you have been waiting for: Chewy’s name came to be from a leader at Cox Monett (formerly St. Vincent’s).

“We were demolishing an old plaster lathe ceiling in the basement of the former hospital,” he said. “My technique was to sledge hammer it overhead and let it collapse behind me as I walked. Someone said I looked like a gorilla, but my leader said I looked like a wookiee named Chewbacca, so from that moment on, I was Chewy - with a Y - I might add.”

Perhaps the reference to a fictional character in the Star Wars franchise came from an uncanny resemblance to Chewbacca, but Vroman feels it most likely came from the fact that he is a tall, strong man who was destroying things in his path.

Vroman went on to purchase a wookiee costume that makes an appearance every so often, sometimes even when people least expect it.

“I remember one time I put the suit on to make an appearance for an event in the conference room,” he said. “I was standing on the other side of a stairwell door when an employee opened the door and let out the loudest scream I think I have ever heard. Turns out, his biggest fear is Bigfoot,” he says with an ornery laugh.

With no plans to retire anytime soon, Vroman recalls many good times while working at Cox Monett and now Cox Barton County in Lamar a few days a week.

“Working at small facilities gives a person a sense of family,” he says. “It’s the feeling that I have in my heart, family and friendships, why I feel CoxHealth was chosen as one of the best places to work in the nation.”

It’s hard to believe, but Vroman does have a life outside of work. In his spare time, he enjoys electronics, robotics, woodworking, primitive skills and many other interests.

“If you ever forget my real name just yell Chewy, or look up my nickname in the CoxHealth email directory,” he says. “The wookiee at Cox Monett is at your service.”