The case for Medicaid expansion 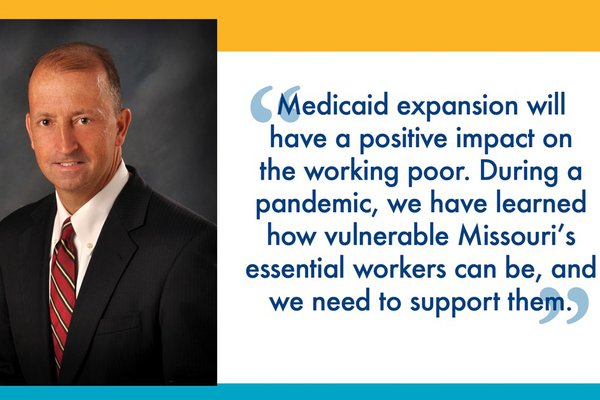 Helping the vulnerable when they need it most. That is the bottom line on Medicaid expansion, says CoxHealth President and CEO Steve Edwards.

He has never worried about having health insurance, but he knows that for many in our community, coverage is an ever-present concern.

“I have never felt vulnerable a day in my life. I know how fortunate I have been and I feel a compelling sense of duty to help others,” he says. “If I had had a bad break, my life would be very different. Those of us who have had some good breaks have a duty to help those who have had bad breaks.”

Expanding Medicaid would provide that help. It is key to caring for our community and region, especially during a pandemic. And, it is a chance to bring money we are already spending back home to care for those we serve.

Missouri voters will decide on Medicaid expansion on Aug. 4. We sat down with Steve to get his thoughts on what expansion would mean for CoxHealth and our region.

The age of COVID-19 is a unique time for health care and it makes the need for increased coverage clearer than ever.

“Those without coverage create vulnerabilities for the whole community,” Edwards says. “If someone doesn’t have access to testing or treatment for a disease in a pandemic, we are all vulnerable. If we look at it from our own individual wellbeing, the better covered our community is, the safer we all are.”

Edwards thinks about essential workers who are serving in jobs that don’t offer insurance. Often, they are barely getting by and may have to make difficult choices about seeking care.

Imagine a single mom who wakes up with mild symptoms that could be allergies, or could be COVID-19. She doesn’t want to risk her job and makes the choice to go to work.

“If someone had insurance, they would have checked it out. If they were sick, they wouldn’t lose their job," Edwards says. "People who don’t have insurance go to work anyway – it’s one of the reasons we are having the outcomes we are having in the U.S. during the pandemic.”

“People are struggling and desperate, and we have to give them some grace.”

A safety net for working people

Medicaid expansion would be one way to help those facing that struggle.

Many uninsured essential workers would qualify for coverage if Missouri expanded Medicaid. Expansion would raise eligibility up to 138 percent of the federal poverty level, about $26,000 for a family of three.

Right now, the cap is 21 percent of federal poverty level. That means a family of three earning more than $4,479 annually cannot qualify.

“Medicaid expansion will have a positive impact for working people,” Edwards says. “This is not a handout. The majority who will find coverage are people who are working hard and truly can’t afford coverage.”

There are serious societal implications when large swaths of the population don’t have access to coverage and care.

“Think about someone with type I diabetes who loses a job and can’t afford insulin,” Edwards says. “They can face hospitalization, amputation or heart disease.

“There are a lot of highly managed chronic diseases where people can live healthy, productive lives. Without access to care and things like insulin, the consequences can be grave.”

When you think about all of those costs and lost productivity, it is clear that addressing the problem is aligned with our mission.

“People can be stuck in a cycle of poverty and this sort of thing can help the most vulnerable people. It will make us more prosperous as a state and help us be healthier as a state.”

Medicaid expansion would help in one of our region’s biggest areas of need: those struggling with mental health.

Mental health challenges can start a vicious cycle. If someone has a bad episode, they can miss work, get fired and then lose their insurance.

“A lot of mental health issues can be managed with affordable medications. People don’t have access to those if they don’t have insurance,” Edwards says. “With Medicaid expansion, people who lose a job can qualify, get well, get a job and contribute to society.

“It’s a way to convert people back to a position where they can be a benefit to society.”

Medicaid expansion has major implications not just for health, but for our state’s economic success as well.

In states without Medicaid expansion, insurers take on more of the burden and insurance rates are higher. That makes it harder to attract new businesses, especially those who are choosing between Missouri and a nearby state that has expanded Medicaid.

“Higher insurance rates make Missouri economically less attractive to development. If a business was on the Missouri and Arkansas border, and you knew rates were lower in Arkansas, why wouldn’t you choose that?

“Expanding Medicaid is an economically smart thing to do.”

Bringing our own money home

“So far, we have turned down $8 billion in federal funds. These are funds generated from our own tax base,” Edwards says “No matter your party, as a fiscal conservative it is hard to allow us to be taxed and not bring some of that money back.”

Missourians currently contribute far more to the federal government than we receive. Other states receive federal funds at a higher rate than they pay in.

Essentially, we are subsidizing states that have expanded Medicaid. An expansion would be more equitable for Missouri.

“We are getting a bad deal. We are paying money to the federal government and we are not getting it back. We need to bring Missouri money back home.”

Ultimately, COVID-19 has exposed some of the shortcomings of our national health care system.

When there is an opportunity to make things better, we need to take it.

“Our country has highest cases and highest number of deaths, which is not proportionate to our size and our wealth. It reminds us we have big gaps in the system,” Edwards says. “I am not an advocate for socialized medicine, but if we can fill the gaps for the most vulnerable, we can have better outcomes.

“We don’t just have a need to help the vulnerable, we have a responsibility. A responsibility to give a hand to those who are struggling. A rising tide lifts all ships. Knowing that we can raise the tide for people in our community – we have to do it.”

What Medicaid expansion means for CoxHealth

CoxHealth has formally endorsed Medicaid expansion, since it is an issue tied to our core mission.

The vast majority of Missourians who would benefit from expansion live in CoxHealth’s service area. We serve these patients, and ensuring they have coverage is key to improving their health.

“Access to care can reduce morbidity and mortality,” Edwards says. “If we have better coverage, people will have access to care earlier.”

Financially, CoxHealth loses less money on Medicaid than we do on uninsured patients. Expansion isn’t a financial gain, but it can reduce our losses.

Teresa Coyan, CoxHealth’s VP of Public Affairs, points out that expanding Medicaid would also have major financial impacts from other federal programs.

One example: The 340B program. 340B is designed to help health systems that care for a disproportionate number of poor patients. The federal government measures the number of disadvantaged patients based on a state’s Medicaid enrollees.

“Because we haven’t expanded, Missouri, technically, has fewer people on Medicaid,” Coyan says.

The Medicaid numbers are lower because people can’t quality, not because they are doing well financially. Earning as little $4,500 annually is enough to make a family ineligible for Medicaid currently.

“We are serving those patients and families, we just can’t access the federal benefits,” Coyan says. “We have a low percentage on Medicaid and a very high number of uninsured patients. Cox Branson is a safety net hospital, but we don’t get that funding.”

Edwards says expanding coverage is an essential step in fulfilling our mission to care for the communities we serve.

“Medicaid disproportionately serves women with children,” he says. “We know they don’t stay on it for life. This is a short-term safety measure for the vulnerable in our community.”