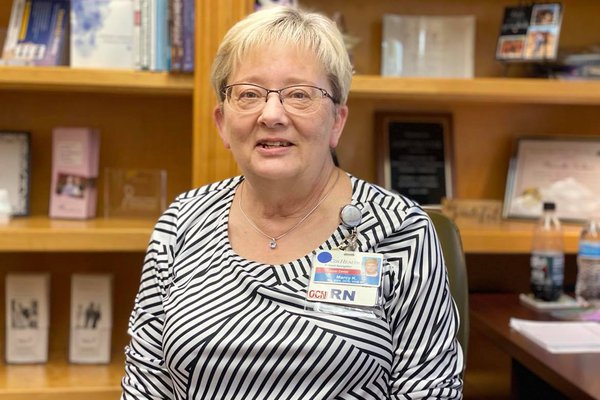 When Marcy Keltner turns off her office light at the Cancer Center later this month, it’ll mark the end of an epic career – a trailblazing run spanning five decades.

Keltner, an Oncology Navigator at Cox Branson, is at peace with retirement but struggles to think about her career being “over.” After all, she’s packed a lot of experiences into her more than 50 years in health care. She admits it’s hard to wrap her mind around all of the cancer journeys she’s witnessed – work she calls more of a “mission.”

“Cancer care certainly takes a special kind of person,” she says. “You learn to treat the whole person, including their emotional, mental and spiritual needs. When an oncology nurse learns how to approach health care that way, they’ll be hooked forever.”

Keltner’s passion for people and nursing grew roots back on the farm when she was just a kid.

“I was always taking care of the kitties and other animals,” she recalls. “But, after I had surgery when I was seven years old, that’s when I knew I wanted to be a nurse. So that’s what I did.”

In 1969, she started right out of high school as a nurse aid at a nursing home in Iowa. She loved the work and decided to continue her education at Burge School of Nursing in Springfield where she graduated in 1972.

Early in her career, she was a float nurse who worked on different units. That’s when she found out which areas she liked and which ones weren’t her favorite.

“They kept floating me to the cancer ward, and I didn’t like it at all,” she says. “People were so sick and cancer care was very different than it is now. I was offered a full-time position at the unit and I turned it down.”

It was a different story when the position was offered to Keltner a second time. She realized oncology had grown on her and she accepted the job.

“It took years for me to realize why I had that change of heart. It was about the relationships and how you got to know people and you really became part of their life story. It really became a heart thing. It’s where God wanted me to be. He had my path figured out long before I did.”

Keltner stayed on that unit for a number of years before leaving to work in the oncology physician offices. That’s where she became part of a trailblazing component of care. She and one other nurse would go to hospital rooms to administer chemotherapy. Before that time, only physicians did that.

Marcy later returned to the hospital setting, becoming the nurse manager of the inpatient and outpatient oncology units at Cox South.

During her tenure leading that department, she continued to pioneer programs to strengthen oncology care in our area. She started the Oncology Nursing Society (ONS) Heart of the Ozarks Chapter in 2001 which is still active to this day. Keltner was also instrumental in bringing the American Holistic Nursing Association’s (AHNA) certification course to CoxHealth, making the health system the first hospital to align with the AHNA for nurses to get their certification. Her influence with that society was integral in bringing the group’s national conference to Branson in June 2015.

She implemented the Planetree concept on the inpatient Oncology Unit during her leadership. This concept transforms the traditional clinical environment into a more home-like setting by breaking down those traditional barriers. It’s a more Holistic approach and encourages caring for the whole person by not limiting care to just the patient’s physical being. The Oncology Unit was remodeled to accommodate that approach of care which included bringing in music therapy, pet therapy, healing touch and acupuncture.

After two decades leading that team, Marcy was ready for a new challenge. That’s when opportunity came knocking in 2013. Cox Medical Center Branson was looking for an Oncology Navigator. Marcy knew it was the perfect fit. Her role blended that “heart work” she talked about along with the slower pace she sought after years in bedside care. She’s helped countless patients navigate their way through difficult diagnoses in Branson – holding their hand both figuratively and literally.

“I will always say oncology is a calling,” she says. “Those connections with a patient and their family are priceless and that support we provide is so important in their fight. It has been my honor fighting beside them.”

She says she’s ending her career with work friends who became family.

“They are just the best,” she says. “I’m sure going to miss them, but I’m excited to have more time with my own family.”

That family includes her beloved husband Kent, her sweetheart of 47 years.

“He’s been my rock since the start of my career,” she says. “I’d bring home my burdens each night and he’d always listen. Always. He was my constant support at the beginning of this journey and he’ll be my champion at the end of it. Fifty years is a long time! I feel good about moving on and slowing down. I look back and know I’ve given it my best.”