For better, for worse: Couple gets married at groom's bedside in Branson 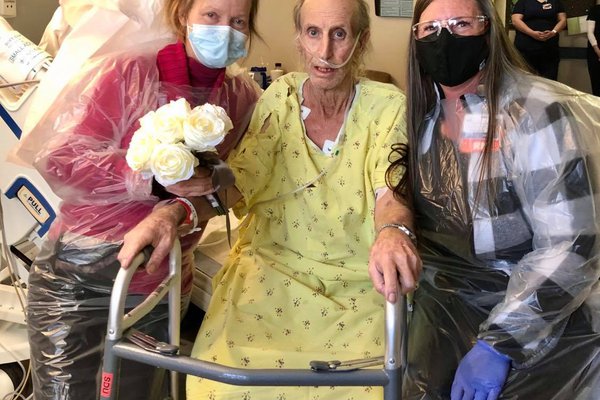 Jim Pearce of Ridgedale knew he’d marry his sweetheart Annette when he met her a few years ago. Neither of them realized though how sacred their wedding vows would be one day.

The couple became engaged in 2018 but a few setbacks with their home’s remodeling caused setbacks in their ceremony. Then last year, the pandemic pushed back the nuptials once again.

“We wanted to have a wedding and invite people to our home, but the timing was just wrong for that to happen,” Annette says. “We had each other and our love so an actual ceremony didn’t seem like a priority.”

Those priorities shifted this past summer when Jim, a long-time fishing guide at Big Cedar Lodge, felt a lump near his groin. His health declined rapidly and, by January, he was battling an aggressive and advanced stage of testicular cancer.

“We were just shocked,” Annette says. “He lost so much weight and became so weak so fast. He was fighting the physical battle and I was dealing with the emotional fight. It’s so incredibly hard to see your loved one so sick.”

Annette didn’t want her “Jimmy” -- a lifelong bachelor -- to miss out on marriage.

“It was so important for us both! I knew I had time, but I knew he didn’t,” she says. “I wanted us to officially become two people fighting as one.”

Lynne Yaggy, the Chief Nursing Officer and VP of Clinical Services at Cox Branson, has known the couple for years. In addition to her duties at the hospital, Yaggy is also an ordained minister – perfect for hatching a plan to host a hospital wedding.

“Jimmy is the kind of guy who would literally give you the shirt off his back without you even asking,” Yaggy says. “So, when I found out he wanted to get married, I knew that’s exactly what needed to happen.”

Yaggy pulled together a small ceremony at Jim’s bedside this week at Cox Branson. She bought a beautiful bouquet for the bride and nurses created a custom bridal veil made from nursing goggles and tissue paper. The couple even exchanged rings; Annette received the ring that belonged to Jim’s mother.

“Jimmy really wanted to stand up for the ceremony, but he was so weak,” Annette explains. “But, he’s feisty and found the strength to stand there and marry me. Those vows ‘For better or for worse’ keep us going right now.”

Annette admits it’s difficult watching her husband struggle but finds strength in sharing stories about his glory days at Big Cedar -- a job he loved and kept until he became ill.

“Did you know he even taught Miss America to fish?” she says with a big smile. “When celebrities like Dierks Bentley or Barbara Mandrell came to town, they’d go on a guided fishing tour with Jimmy. Those are such good memories for him! He was happiest on the water with his friends and family.”

Annette, who says she’s not much of an angler but still had fun tagging along, had a recent realization about the meaning of true love – a realization that sparked a hard conversation with her new groom.

“I begged him not to give up this fight,” she says while standing over his bedside with tears in her eyes. “But, I told him he has my permission to quit if he needs the rest. Even the strongest people run out of fight sometimes.”

Annette’s favorite fisherman is starting to wake up.

“Hey,” she says as she strokes his arm. “I was just talking about how you once taught Miss America how to fish.”

Jim grabs Annette’s hand, takes the biggest breath he can muster and looks at his new bride with a smile.

“Miss America’s got nothing on you.”