Along came a spider: Straight talk on brown recluse 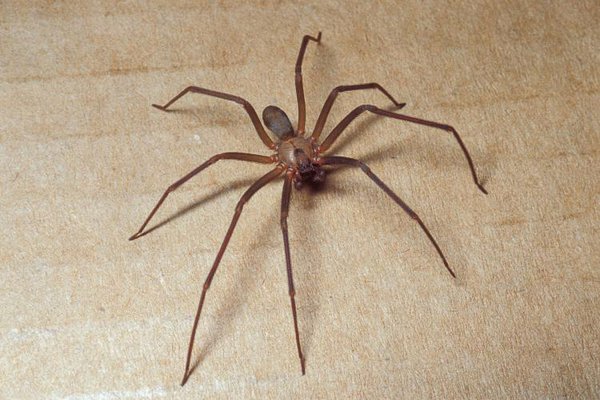 Just the thought of spiders in their home is enough to give some people the willies – and brown recluse spiders can cause special concern due to the nature of their bite.

While Cox Medical Center Branson treats several patients with spider bites each year, the Missouri Department of Conservation says there are many myths surrounding brown recluse spiders, including the common notion that they are aggressive.

“These guys aren’t going to bite you unless they feel too cramped or are afraid you’re about to squish them,” says Forrest Summers, an intern at the Shepherd of the Hills Fish Hatchery. “The spiders know that you are too big to eat, so they won’t waste their venom unless they feel absolutely threatened.”

Another myth is that brown recluse are usually outside, but Summers says the spiders are usually found inside. “You won’t see them in the grass, but you’ll see them in places like piles of clothes on the floor, inside cardboard boxes or even crawling across your floor.” And, brown recluse spiders don’t spin webs to catch prey, instead, they wait for small insects and other spiders to come close enough to bite.

“Sometimes, the hole can go all the way to the muscle,” says Stacy Cox, the clinic’s manager. “The venom can kill a large area of flesh and leave permanent scarring if left untreated.” She recommends that patients put baking soda on the bite if they can’t go to the doctor right away. Baking soda can help neutralize the venom and putting ice on it can prevent swelling.

Specialists at the clinic treat bites by removing dead tissue and skin around the affected area then applying specialized bandages and medication that help the body heal open wounds. There is no anti-venom for brown recluse spiders, but a number of medications can treat symptoms of the bite, including pain relievers and antibiotics if the bite becomes infected.  It can take several weeks for the wound to heal completely.

Bottom line: Just be aware. Shake out clothes that have been lying on the ground before putting them on, and be careful when taking things out of cardboard boxes that have been stored in dark places.  If you’ve seen a brown recluse in your home experts suggest placing glue traps or calling an exterminator.