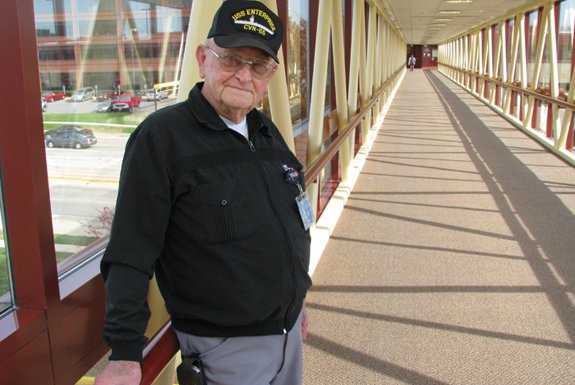 Ed Keeth, a familiar face in the halls at Cox South, will be leaving his post at the end of 2016 as his wife, Beth, retires from her role in Food Services. In the summer of 2013, our own Yvette Williams spent a lunch hour in the skywalk with Mr. Keeth, creating the profile below, which originally appeared in CoxHealth Connection, CoxHealth's employee magazine.

The bit about the badge is classic Ed Keeth.

“Did you see my badge?” One of the nurses over here at Wheeler made it for me.”

“One of them came by later and said this word was wrong.” Keeth points to the word “monitor.” “She said it should be the Official CoxHealth Hall Agitator. And everybody I talk to believes that. I don’t know why.”

If you’ve ever had the pleasure of passing by Ed Keeth in the skywalk at Cox South, near Foster Auditorium or at the North Entrance to the Springfield hospital, you’ll quickly learn why he has earned that title.

From a distance, he appears to be waiting for someone or just people watching as he leans against the wall, or stands at attention, sometimes with his hands behind his back, looking up and down the hall.

As you get into speaking range, get ready. Unless he’s talking to someone else, he will engage you. From patients to the CEO – everyone is fair game. At first it’s nice pleasantries: hello, how are you. He has a knack of knowing when to play it straight, offering just a quick hello and a nod of the head to some who pass by. But if he recognizes you and if he thinks you’ll play along, the fun begins.

In the few seconds it takes to walk by, you’re likely to get hit with one of his many witty, clever, and sometimes puzzling one-liners – quips and zingers that will fly, even if you’re not meeting his eye or if you’re walking in a group.

Looking at one person and pointing to another he might say, “You better watch out. Being seen with her will ruin your reputation.” Perfectly timed lines delivered in good fun, and he always gets a laugh, or at least a smile. If he’s lucky, he’ll get a quick remark right back, like the “hall agitator” comeback.

Although many people don’t know his name, for the past 10 years Keeth has been a favorite fixture at Cox South. Every day, except for Thursdays and every other weekend, Keeth comes to the hospital to drop his wife, Beth, off for work in Food Services. At noon, he comes back just to hang out at one of his three special spots.

Then at 12:30 he meets his wife in the cafeteria for her break. Afterwards he spends another 30 minutes hall monitoring until it’s time to take her home for the day.

For Keeth, it’s an interesting way to spend his time and it’s just as much fun for everyone else.

“I normally get here…” Keeth is interrupted when someone spots him down the hall and warns, “You better watch out for that one!”

He continues, “I enjoy working with people. I enjoy ‘bullyragging’ people, carrying on, giving people a hard time. I learned quite a while ago it’s not what you say to a person, it’s how you say it in most cases. There are exceptions to that. If someone takes offense to it, I just quit.

“Sometimes I say something to them and they start laughing. They’ll ask me how I am and I’ll say I’m fine as a frog’s hair. To me it comes natural. My mom and dad were like that. My dad ‘picked on’ my mom just like I pick on Beth. They’d carry on and I guess that’s where I learned it. Normally I speak to everyone. It makes me feel good and maybe I’m changing somebody’s attitude in the day.”

The hall starts to get busy. He goes into action as people walk by.

“What do you say, ornery?” The passerby responds, “Good, how are you?” Ed comes back with a common topic, “Where’s my lunch?” “Well, I’m sorry they ran out.”

Keeth continues. “A lot of them start giving me a hard time. Now Dr. Duff, we go back and forth all the time. The CEO – I was in the skywalk here and the next time he came by I was a little farther down and he noticed. He asked me, ‘Are you looking for a job?’ And I said I’m thinking about a job. He said. ‘What job do you want?’ And I said ‘CEO – would you be my reference?’” Keeth stops to chuckle. “Then he said, ‘Yeah I guess so.’”

A transporter walks by with a patient. “Oh, not you again,” Keeth says. “They finally took your license away didn’t they?”

Keeth continues when there’s a lull in the activity. “To other transporters, I’ve said to the patient, ‘Ma’am, you’re taking a big chance. She lost her license last week!’

To another passerby: “Look, I’ve seen you enough.” The response: “All right, I’ll have to bring my lunch the rest of the week.” The person passes and Ed says with a smile, “There you go. As you can see, I say whatever comes to my mind at the time.”

“You’re running late again,” he says to a staff member walking past. Another walker says, “There you are, in your spot.” “That’s me, that’s me,” Keeth responds until he recognizes the person. “Oh, no, not you!”

He turns back, “Anyway, what was I saying?

Someone says hello to Keeth. He asks, “Are you staying out of trouble?” The person answers yes and Ed says, “Why is it I don’t believe that?” The woman can be heard laughing down the hall.

As his 30 minutes wind down, someone throws the first line before Keeth sees it coming:  “Are you going to start the New Year off nicer?” Ed turns and replies, “I’m always nice, you know that?”

“I think he’s funny and just the nicest guy in the world,” says Kenworthy, who works in Wheeler Hospital Services. “He tells me the only time I can stay in the cafeteria for lunch is when my mother is with me, because she makes me mind.”

About Keeth’s exchanges, she says, “It’s wonderful. I miss him when I don’t see him. His teasing is how I know he likes me.”

If you missed him this time, don’t worry. You’ll be able to catch one of Ed Keeth’s repeat performances at Cox South – same time, same place. Don’t forget to ask him how it feels to be a Connection celebrity.